Ramos free-kick sends Real back to top of La Liga 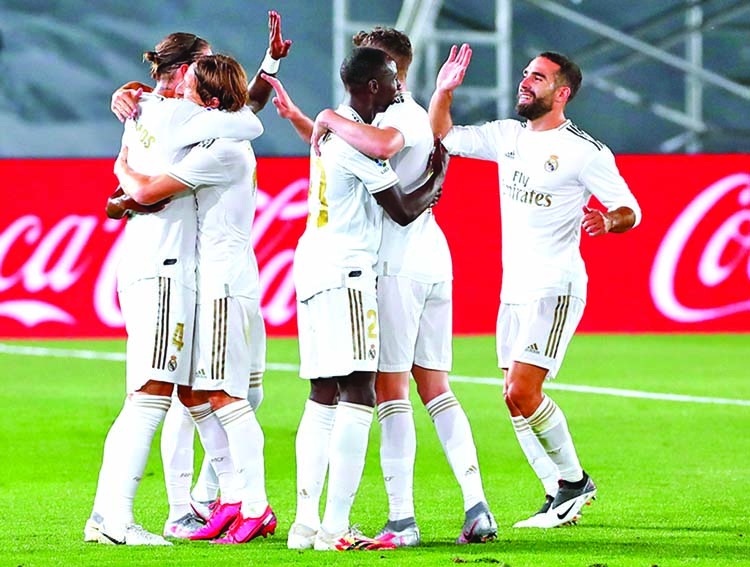 CAP: Real Madrid captain Sergio Ramos celebrates with teammates after scoring a goal against Real Mallorca on Wednesday in Madrid, Spain. -Twitter
Sergio Ramos' sensational free-kick helped Real Madrid move back above Barcelona to the top of La Liga as they defeated Real Mallorca 2-0 on Wednesday.
Ramos brushed aside Gareth Bale to take the shot and justified his claim with a curling strike into the top corner after 19-year-old Vinicius Junior had put Madrid in front in the first half.
Madrid's victory at the Alfredo di Stefano Stadium means they are level again on points with Barcelona but sit above their title rivals in the table due to a superior head-to-head record.
Bale has been hardly used since La Liga resumed on June 11 but Zinedine Zidane continued his rotation policy and handed the Welshman his first start since February 16. Yet an underwhelming display is unlikely to push Bale back into Zidane's preferred eleven as Vinicius enhanced his case with another lively, if erratic, performance.
The Brazilian also hit the crossbar in the first half. Ramos, though, stole the show with his brilliant free-kick, taking his personal tally to a career-best eight goals for the season, after he became La Liga's highest ever scoring defender on Sunday by scoring a penalty against Real Sociedad.
The only worry for Madrid was that Eden Hazard was taken off shortly after the hour, raising doubts over whether the Belgian is fully fit or completely confident in his troublesome ankle. There was also time at the end for history to be made as Mallorca's Luka Romero became the youngest player ever to play in La Liga, aged 15 years and 219 days.
---AFP, Madrid