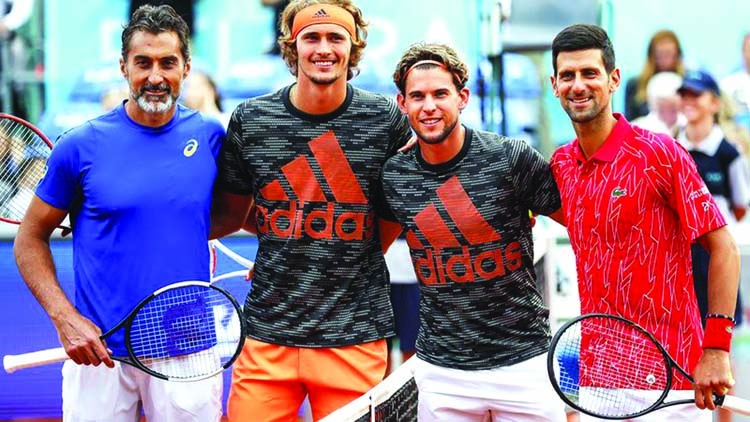 Nenad Zimonjic, Alexander Zverev, Dominic Thiem and Novak Djokovic pose for a photo. -Getty
Images of players hugging at the net, playing basketball together and partying at Novak Djokovic's charity exhibition in Serbia and Croatia were "disappointing" and tennis must learn its lesson, outgoing Wimbledon chief Richard Lewis has said.
Djokovic, Grigor Dimitrov, Borna Coric and Viktor Troicki contracted the novel coronavirus after playing in the Adria Tour, which drew big crowds and saw players pose for pictures.
Lewis, who will step down as the CEO of All England Lawn Tennis Club in July, toldBritish media he hoped everyone made a speedy recovery but that the mistakes of the event must not be repeated.
"The images were disappointing and I think that ... what needs to come out of it is everybody involved - not just players, but administrators, organisers, entourages - understands that the protocols, rules and regulations are in place for a reason. "That's a really important lesson to learn."
The pandemic forced the suspension of the professional season in early March and the 2020 Wimbledon championships were then cancelled.
The U.S. Open is the next Grand Slam on the calendar and organisers plan stringent measures to keep those taking part safe. Some top players, including Djokovic, had initially called those measures "extreme". With the Serbian world number one heading the men's players council, Lewis urged athletes to play a bigger leadership role.
"I would hope from an organisers' point of view - let's say the U.S. Open and Roland Garros, but also the other international tournaments - that protocols will be easier to enforce and observed than they otherwise might have been," said Lewis."
I sincerely hope that when international tennis tournaments resume, the sport will be more disciplined and follow the protocols in place at whatever tournament is being staged at the time."
---Reuters