I have to take more responsibility now: Akbar 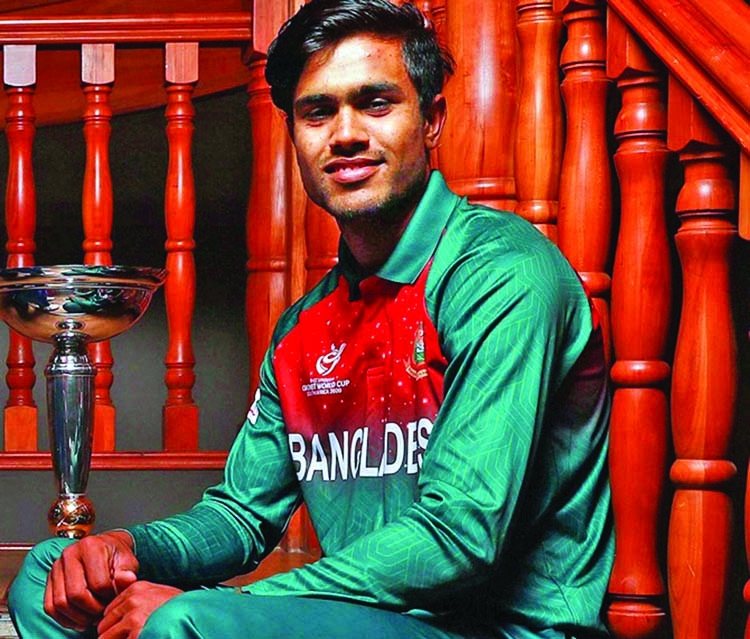 Akbar Ali
Bangladesh World Cup winning Under-19 captain Akbar Ali felt he now has to take more responsibility after he was selected as one of the 20 cricketers who could dominate the next decade.
The cricket monthly magazine of ESPNcricinfo prepared the list asking 15 coaches, scouts, analyst, players and observers around the world. The wicket-keeper batsman Akbar Ali showed his serenity in the nervy final against India in which his unbeaten 43 led the side to a three-wicket victory, defying the condition and weather as Bangladesh won the Under-19 World Cup.
"Those who were in the selection panel are the legend of cricket and other sectors. So when they selected me in the 20 cricketers, it means a lot," Akbar said."It has inspired me immensely. I have to take more responsibility now. This is an honour and I have to prove that they were right to select me."
The other 19 cricketers who were selected in the list of 20 cricketers for the 2020s are -
India batsman Shubman Gill, England batsman Tom Banton, Afghanistan left-arm spinner Noor Ahmed, Pakistan fast bowler Naseem Shah, Australia wicketkeeper-batsman Josh Philippe, New Zealand all-rounder Rachin Ravindra, India fast bowler Kartik Tyagi, England batsman Ollie Pope, Afghanistan batsman Ibrahim Zadran, South Africa fast bowler Gerald Coetzee, India batsman Yashasvi Jaiswal, Afghanistan wicketkeeper batsman Rahmanullah Gurbaz, West Indies fast bowler Jayden Seales, Pakistan batsman Haider Ali, Afghanistan leg-spinner Qais Ahmad, Australia batsman Jake Fraser-McGurk, India batsman Prithvi Shaw, Pakistan fast bowler Haris Rauf and Sri Lanka left-arm spinner Lasith Embuldeniya.
However there was no age limit for the selection as the youngest cricketer on the list was just 15 - the Afghan left-arm Noor Ahmad while the oldest was Pakistani fast bowler Haris Rauf, who was 26.
Instead the magazine placed caps on the number of international matches a player had played to be eligible: no more than five Tests or seven ODIs or seven T20Is as on December 31, 2019. The names appear in no particular order.
Tom Moody, Mike Hesson, Deep Dasgupta, HD Ackerman, Ian Bishop, AR Srikanth, Tim Wigmore, Russel Arnold, Paras Mhambrey, Hassan Cheema, Srinath Bashyam, Tamim Iqbal, Andy Moles, Jarrod Kimber and Robin Peterson are the person to have their say in the selection of the 20 probable future greats.
After winning the World Cup, BCB introduced an Under-21 team, including all of the World Cup winning players in the team. They are due to begin an exclusive camp in a bid to prepare them for the national team. However the outbreak of Covid-19 means Akbar and company has to confine them into the home rather than in the cricket ground.
"We have been out of skill training for the last three months. One round of Dhaka Premier League match is the last that we had played. We are really desperate to start cricket but what to do. The situation is not good. Hopefully the situation will be normal again and allow us to play cricket," Akbar said.