Coronavirus warning issued as Britons flock to the beach 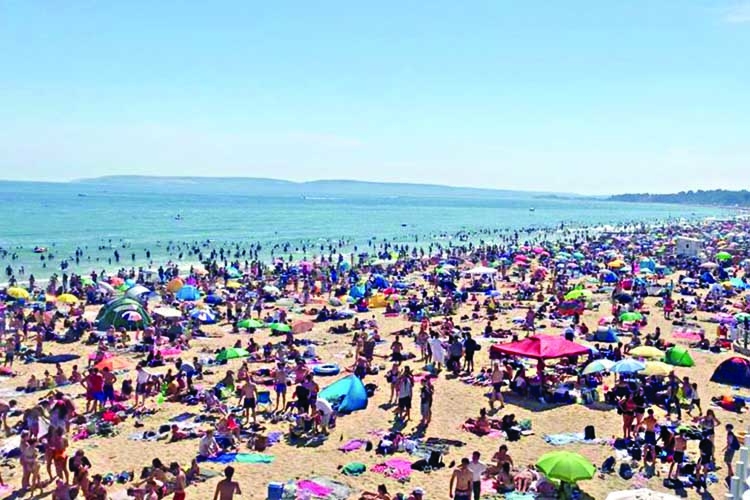 Thousands flocked to the beach in Bournemouth on Thursday. -Reuters
Britons were on Friday urged to abide by social distancing rules over fears over a coronavirus resurgence after tens of thousands of people descended on beaches during a heatwave. The possibility that beaches could be closed has been raised by Health Secretary Matt Hancock, who said ministers would "take action" if rules continued to be broken.
"We just have to recognize that Thursday was an extraordinarily hot day," environment minister George Eustice told Sky News television. "I do think we have to appeal to people to be careful here."
The southern English seaside resort of Bournemouth declared a major incident on Thursday after thousands flocked to its beach on the hottest day of the year.
Temperatures rose to a record 33.3 deg C, prompting an influx of visitors desperate for sea, sand and fresh air after three months of lockdown. Beaches elsewhere were packed as well, prompting the government's chief medical officer, Dr Chris Whitty, to warn about the continued risk of infection.
"If we do not follow social distancing guidance then cases will rise again," he wrote on Twitter. Dr David Nabarro, a World Health Organisation Covid-19 special envoy, told the BBC on Friday that Dr Whitty's advice that "the virus is still in general circulation" was important.
Before England largely lifts its lockdown rules on July 4, there are fears that social distancing rules are being largely ignored. Temperatures were again expected to be high, hitting 31 deg C in London, and the mid-20s for the rest of England, although thunderstorms are forecast later on Friday.
As well as the scenes in Bournemouth, police criticised the number of fans who gathered outside Liverpool's Anfield ground on Thursday night after the club secured the English Premier League football title for the first time in 30 years.
Assistant Chief Constable Rob Carden, of Merseyside Police, said: "Although the vast majority of celebrations were good-natured, a large number of people chose to gather outside the stadium."
Police were also called to disperse illegal parties in London overnight on Thursday, including one in Notting Hill, following similar scenes in Brixton earlier in the week. The Metropolitan Police said missiles were thrown at officers who tried to break up the gathering in Notting Hill but a block party in Brixton left more than 20 officers injured.
Met commissioner Cressida Dick said she was concerned about potential violence this weekend, while the Police Federation in England and Wales warned resources could be stretched. The body's national chairman, John Apter, criticized the reopening of pubs on a Saturday, saying it had "created almost a countdown to carnival".

Britain has been one of the hardest hit by the global coronavirus outbreak, recording the worst death toll in Europe so far. Infection rates have fallen significantly, but the health ministry on Thursday recorded another 149 deaths among confirmed cases of Covid-19, bringing the total to 43,230.
---AFP, London