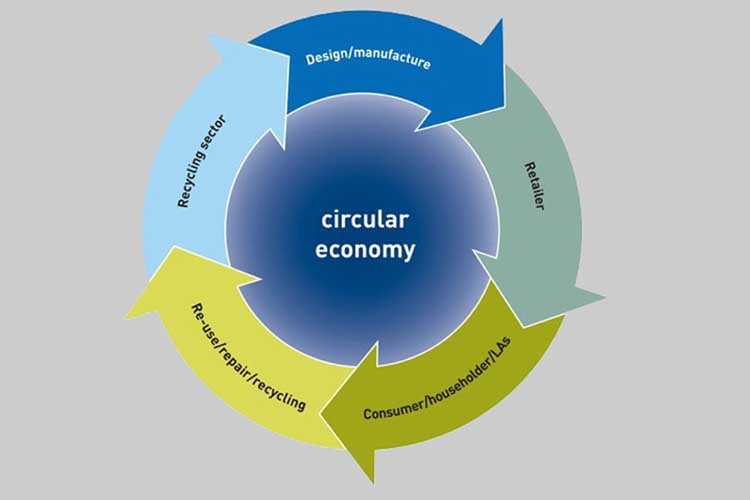 Life is a circle. All that grows return to where it began - the earth. And from there it grows again, forming a perfect cycle. But we have broken that cycle. Our economy is growing unsustainably at the expose of nature.  We have created a linear economic model - make, use and dispose.
We extract millions of tons of natural resources every year and turn them into materials that we use and consume and then we simply throw them away. If we designed products that we can reuse, refurbish and repair. We should use less new materials and energy and protect our natural wealth.
Inspired by nature, a circular approach would boost the general economy contributing to innovation and job growth, reducing pollution and helping the environment by preserving our precious natural resources.
Car pooling, recycling materials, repairing and reusing green energy - many things are going circular. Circular economy brings new opportunities which not only good for nature and energy, it's good for our life and our health. A circular economy is a good way of living well within the limits of our planet.

Why 'Circular Economy' is Important?
Industrial revolution has spurred massive development and industrial growth. But it came at the cost of our planet and environment. In circular economic process, goods are turned into resources at the end of their service life and minimize waste.
Circular economy can redefine economic growth focusing on societal benefits helping to create new green industries and jobs. It reduces degradation of the environment, protect biodiversity and increase resilience to the physical effects of climate change.
Specially, our garment industry is a big opportunity for us. If we can promote and ensure circular economy minimizing pollution and waste, it will benefit our environment, our life as well as bringing reputation to our products in the global market.
Only 10 big rivers in the world are now absorbing 90 per cent of plastic pollution across the globe and by controlling the rivers, this pollution can be reduced. Linear model of development ended with resource extraction, production and consumption. But non-linear approach calls better production process with reuse and recycling of resources which leads to circular economy.
The circular economy framework stresses keeping resources in use for as long as possible, extract the maximum value from them whilst in use, then recover and regenerate products and materials at the end of each service life. There is a shortage of skilled manpower for green production and financing is also a challenge.

'Linear Economy' to 'Circular Economy' China, once the final resting place for half the world's trash, has just banned the import of certain plastic, paper and textile waste. Western countries are scrambling to shift 'the problem' elsewhere - but there could be another way. They could invest more in the circular economy, which would also help them achieve the 2030 Agenda.
Sustainable development refers to a process of economic growth and development, whereby the needs of the present are met without compromising the ability of future generations to meet their own. It is widely acknowledged that the present volumes and forms of economic activities pose a serious threat to sustainability.
Persistent deterioration of natural resources, greater contamination of air, water and soil, diminishing biodiversity, emergence of new types of pathogens, climate change and heightened fragility of human health (even when longevity is increased) are being noted.
Though the solutions to address such challenges are far from obvious, it is accepted that production and consumption patterns geared uniquely to maximize economic growth are very unlikely to be sustainable.
Economic policies for growth were aligned with the 'linear economy model', wherein 'waste' is accepted as a negative element generated by production and consumption patterns geared to maximize economic growth. The focus was uniquely on how to handle the waste once produced, in the most economical manner.
Worldwide, the perspective is moving away from the 'linear economy model' and towards a 'circular economy' enlarging the focus to cover the entire sequence of production and consumption activities that generates the waste required to be disposed. Under the circular economy model, the objective is to explore production and consumption patterns that minimize waste production without sacrificing firm profit or economic growth of countries.
Waste is not destined to be simply disposed, but also recycled to serve as raw materials for new production or energy. In other words, the circular economy aims to be regenerative by design, with minimum production of waste that cannot be recycled and maximal usage of products over time, along with optimal reuse, optimal refurbishment, remanufacturing and recycling of products and materials.
For developing and emerging market countries, transitioning to a circular economy is extremely daunting for at least four reasons.First, they have the enormous challenge of building capabilities in municipalities to ensure safe and efficient systems of collection and treatment of household and industrial waste.
Second, public spaces are often considered to be the responsibility of the state, making indiscriminate littering the behavioral norm. But, this culture obviously cannot be sustained, and therefore behavioral change has to be nudged.
Indeed, no government in the world can keep public spaces clean without the full cooperation of its citizens.Third, since January 01, 2018, China, the world's largest importer of waste, has decreed that it will no longer be the garbage dump of Western countries.
Its ban on imports of 24 types of waste, notably household waste plastics, unsorted waste paper and waste textiles, is causing pile-ups in Western countries, which8ental degradation and greenhouse gas emissions, which are at the centre of climate change issue.
Moreover, this depletion of resources and economic impact of climate change directly threatens the viability of businesses, which in the future will have to compete harder for access to primary resources.
Thus, it is urgent for our society to rethink the current economic model if we want to ensure future generations will be able to thrive on this planet. This calls for a deep and long term change in the way we think about the utilization of natural resources; particularly how they are transformed into capital.
For instance, a forest provides both wood that can be utilized by the economy; but also plays important ecosystem services in terms of regulating temperature, providing oxygen, and even reducing the impacts of climate change by absorbing CO2.
The concept of the circular economy, based on the idea of a closed economy, emerged to deal with the specific limitations of our current economic model and could help to cut up to 33% greenhouse gas emission from material management.
The circular economy is an "industrial system that is regenerative and restorative by design rethinks products and services to design out waste and negative impacts, and builds economic, social and natural capital." Moreover, a circular economy is seen as a third pillar of climate international policies and serves both mitigation and adaptation efforts.
It supports mitigation actions by emphasizing a maxims use of already circulating resources, use of regenerative resources (as oppose to non-renewable), and better design of products for easier repair and recycling, thus allowing a reduction in greenhouse gas emissions from both natural resource extraction and from some industrial transformation processes.
A circular economy can be a climate change adaptation approach in that it ensures interventions are not so resource intensive so that they cannot sustain into the future.

Bangladesh to Circular Economy It is high time for strengthening the transition to renewable energy sources and the circular model, which builds economic, natural, and social capital. It is based on three principles - design out waste and pollution, keep products and materials in use and regenerate natural systems.
Most companies today are operating within the linear economy model, which is based on the "take, make and dispose" model, for instance - a light bulb company takes resources like glass or metal to manufacture its products, the company makes the bulbs and sells it to the customer who uses it.
This linear economic model (produce-use-dispose) is recognized by a far-reaching value chain and ample waste production, which linked with meager natural resource capital management, leads to severe environmental degradation and greenhouse gas emissions, which are at the core of the climate change.
Moreover, this exhaustion of resources and economic impact of climate change directly threatens the feasibility of businesses, which in future will have to fight harder for having access to primary resources. In the circular economy model, a company will not only reprocess products, but also preserve its ownership all along.
The model follows the process of "make, use and return." Most of you probably heard the name of a well-known apparel company H&M, one of the largest fashion retail chains in the world. It is working on a strategy to become 100% circular, the company collects all garments and fabrics and recycles them.
The company has been assembling 55,000 tons of fabric to reuse for new clothing since 2013. Some Governments in the European Union (EU) are getting committed to the idea of the circular economy. For the purpose of making the supply chain more circular, the EU approved an action plan in 2015.
This incorporates everything from production to use or consumption, restore, manufacturing and management of waste. The point is not just the environmental benefit, but there could be an economic benefit too.
There has been a shift towards the circular economy in the EU which could lead to a 12.5% additional increase in GDP by 2050. In the UK, 22% of companies are trying to produce returned values for reuse, recycling, and renovating.
It has also been estimated that the cost of reuse, recycling, and renovating across Europe, could be as much as 108 billion dollars. For a developing country like Bangladesh, moving from linear economy to a circular economy model is a tremendously intimidating task for some reasons.
We have the massive challenge of ensuring competence in the cities to guarantee safe and efficient system for household and industrial waste collection and treatment. our public spaces are often regarded to be the duty of the state, making the arbitrary littering our behavioral norm.
Nevertheless, without the full co-operation from its citizen, no government can keep the public spaces clean. Therefore, the behavioral change has to be brought among the citizens. We must address extreme resource constraints, capacity shortages and heavy burdens of poverty in order to shift to the circular economy model.
Cost is certainly one matter, but shifting the way of thinking of people regarding the adoption of this model is also another matter. In this context, government needs to realize and rethink the prospects of moving to the circular economy.