Brazilians flock to beaches despite wave of coronavirus infections 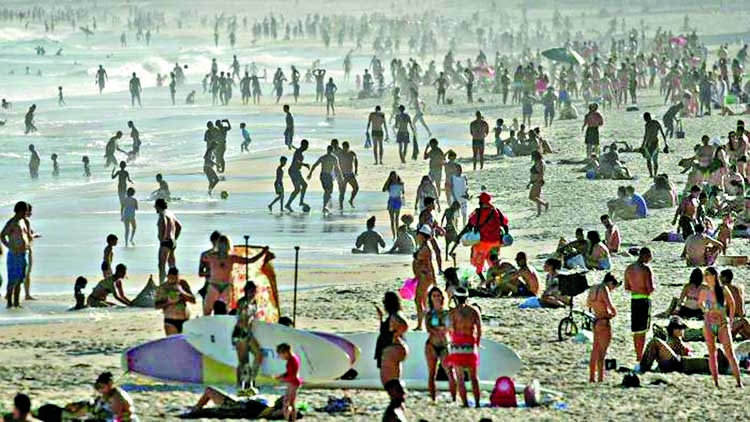 Rio's beach-mad 'Cariocas' have packed Ipanema and other resorts despite the official ban against remaining on the sand. -Reuters
u
It had been a beautiful sunny week in Ipanema, one of the world's most famous beaches, and real estate broker Fernando Garajaú could not believe the opportunity to take a dip in the sea had finally arrived. "What a delicia [delicious]," he said. "Three months confined and now we can come back."
Although Brazil is in the middle of the world's second-worst coronavirus outbreak, Rio's beaches reopened this month. Officially only swimming and surfing are allowed, with people required to remain at least two meters apart.
But thousands of beach-mad Cariocas, as the people of Rio are known, this week flocked to Copacabana, Leblon, and Ipanema's sands to sunbathe, picnic or play football, defying rules aimed at curbing a pandemic that shows no sign of abating.
Last weekend, Brazil surpassed 1m infections to record the second-highest caseload in the world after the US, with Rio the country's second-worst affected state after São Paulo, reports Financial Times.
"Staying on the sand is prohibited at this time," clarified Rio's city government. But a police sergeant who patrols the beaches said: "It's impossible to take the people out of the beach, let alone force them to wear masks. If they want to get infected, well, what can I do?" Covid-19 hit Brazil several weeks after Europe, but it is trying to reopen for some businesses and for exercise at the same time. "
The beaches are packed, it's very sad. The problem is that you can't force people to have common sense," said Chrystina Barros, an expert in public health management at the Federal University of Rio de Janeiro, where she is part of a team fighting the disease.
She warned Rio was entering a more relaxed phase even as infections in the state continued to soar, almost doubling from 50,000 in early June to more than 100,000 this week. On Thursday alone, the country as a whole reported almost 40,000 new cases and 1,141 deaths.
Analysts say authorities nationwide are easing curbs following a drop in occupancy of intensive care beds in hospitals and increasing pressure from lobby groups and the country's far-right president Jair Bolsonaro - who has slammed lockdown and social-distancing orders issued by state governors and city mayors.
In Rio, shopping malls, construction sites and some professional businesses are already open, with some restrictions, and restaurants will be allowed to welcome a limited number of guests from next week.
"It is horrendous," said Margareth Dalcolmo, a pulmonologist with the Rio-based Fiocruz, a state-backed health research institute. "The reopenings should not have happened because the epidemic is not under control, there is no treatment, the vaccine will not be here anytime soon."
"The risk is that we will have a new spike, and an important spike," she added. "Considering that we had a very high mortality rate, we should be doing everything to prevent this from happening again, not opening."
Rio's Covid-19 death rate stands at almost nine per 100,000 people, double that of Brazil overall.A study released this week by the University of Oxford in the UK noted that people living in some of Brazil's major cities "generally do not understand that self-isolation means you should stay at home without going out".
Many observers blame the attitude in Rio on its beach culture, but also on Bolsonaro, who has dismissed coronavirus as a "sniffle". Throughout the pandemic, he has continued to greet crowds of followers in public unmasked and has told his nation of 211m people it was inevitable that 70 per cent of them would catch the virus.
Earlier this month, protesters critical Bolsonaro's response dug 100 graves and placed black crosses in the sand of Copacabana beach as a memorial to those killed by the disease, only for the installation to be wrecked by the president's supporters.
This week, a judge ordered Bolsonaro to wear a mask in public, a compulsory requirement in Brasília, the capital. Bolsonaro, who is at loggerheads with the judiciary over investigations of himself and some of his closest allies, has been flouting the regulation.
His staunch ally and former education minister, Abraham Weintraub - who also has tense relations with the country's supreme court and who resigned last week - was recently fined for not wearing a mask in Brasília.
"Bolsonaro has been setting an example opposite to what is expected of a leader, of a head of state who must protect the life and health of the population," João Doria, the governor of São Paulo who is tentatively moving to reopen Brazil's most populous state, told the Financial Times.
His sentiment is echoed in the favelas of Rio, as what started as a disease of the rich who brought it from Europe has ripped through the slums. "Our president keeps encouraging the population to disrespect social distancing," said Lucas Louback, a social activist in the favela of Jacarezinho.
Experts at Fiocruz fear the hastened reopening will further harm these communities, who typically live in cramped makeshift dwellings with limited access to clean water to wash their hands.
"Not respecting social distancing for those who live in the community is a very different reality from not respecting it in the rich areas. Going to the beach is a pleasure for the rich to enjoy in a time of pandemic," said Mr Louback.But Messias Oliveira, who has been selling coconuts from his kiosk on Ipanema beach for quarter of a century and welcomed the revival in his business, shrugged off the doomsayers.
"I had never seen the beach as empty as before this week. And then I had never seen people rushing to it with so much impetus as during the last week," he said. "Cariocas are like fish, you cannot keep them out of the water."