Child marriages on the rise in pandemic 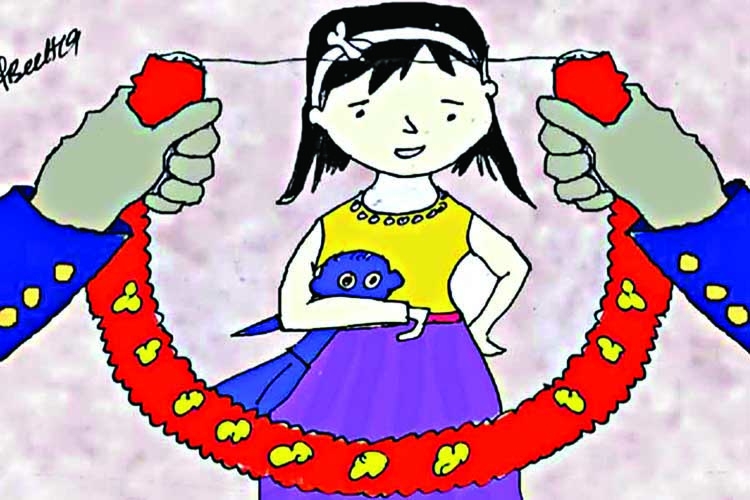 Child marriages have gone up significantly in Bangladesh due to impacts of the coronavirus epidemic on the socioeconomic situation.Rights organizations have cited an increased number of child marriages happening in parts of Bangladesh.They were concerned that the situation will go out of control as the administration's efforts to prevent child marriages have ebbed.
At least 13 percent of the responders taking part in a survey conducted by the Gender Justice and Diversity Division of BRAC said child marriages are happening in their areas. Among the 557 interviewees in 11 districts, 72 said they witnessed 73 child marriage in times of pandemic, reports bdnews24.com.
Almost 85 percent of the marriages took place due to the parents' concern about their daughters' future, while 71 percent occurred due to the school closure. Returnees from abroad during the virus epidemic topped the list of grooms preferred by 62 percent of the families marrying their children off.
Low income of the parents or guardians unable to run their families is responsible for 61 percent of the marriages."Some of the parents think that the lingering coronavirus epidemic will increase economic uncertainty, leaving them unable to feed their children," said the survey report.
Guardians are marrying off their children taking advantage of the epidemic at a time when the administration seems unable to prevent it, said the report.According to Plan International, 40 child marriages took place in Kurigram in February, 29 in March, 19 in April and 33 in May.
Child marriages are increasing against the total number of marriages as the coronavirus crisis is continuing, Plan International, a development and humanitarian organization, said in its report.At least 8 percent of the total marriages in February and March in Kurigram were child marriages, while it rose to 9 percent in April and 11 percent in May.
According to the report, 14 child marriages were prevented in February, 10 in March, 3 in April and 2 in May.Also, there has been a gradual rise in the number of unregistered marriages -- 8 percent in February, 9 percent in March, 10 percent in April and 11 percent in May, as both the government and private initiatives to prevent unregistered and underage marriages have decreased, the report said.
"The monitoring mechanism against child marriages has really fallen apart. The anti-child marriage committee in Kurigram did not hold any meeting in the last three months," said Nazrul Islam Chowdhury, project manager of Plan International.
Although they could not visit from door to door during the coronavirus epidemic, they have received many complaints of child marriages over their hotline, said Khushi Kabir, coordinator of Nijera Kori, a rights organization.
"Parents need to pay a less amount of dowry and can wipe their hands off the responsibility once they marry off their underaged daughters. This is why the child marriages take place," she said.
In times of pandemic, parents are marrying off their children secretly without inviting friends and relatives to the events, she said.Administration staff, marriage registrars and school students and teachers used to provide information on child marriages making it easier to prevent those. That has now decreased, said Khushi Kabir.
The rights activist urged the government to speed up efforts to run an awareness campaign against child marriage.More parents are marrying off their children as the schools are closed now, said Maleka Banu, general secretary of Bangladesh Mohila Parishad, an NGO that promotes women's rights"The government should not stop the scholarship for girls under the present situation; also there should be a provision of online class in rural areas," she said.
Bangladesh Mohila Parishad has prevented eight child marriages in different districts during the coronavirus epidemic with the help of the local administration, she said. "The government should run a campaign to create awareness against child marriage. It will have an adverse effect on national development if child marriages increase in Bangladesh."
State Minister for Women and Children Affair Fazilatun Nessa Indira did not respond to the scheduled call by bdnews24.com on Thursday for comment. Kazi Rowshan Akhter, secretary of the same ministry, did not respond to a call either.