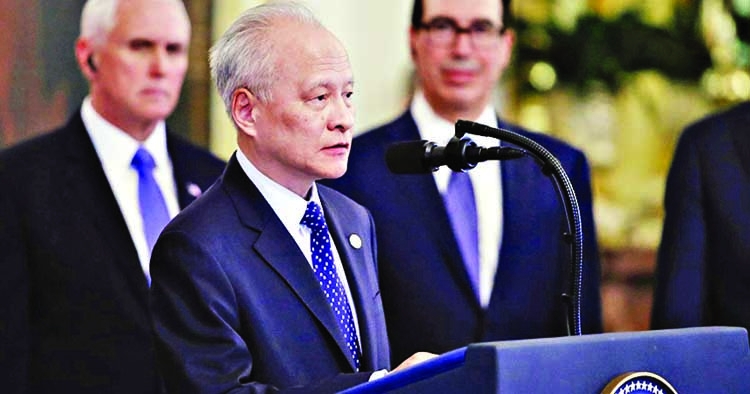 China's ambassador in Washington and a Chinese diplomat in New York City secretly aided in the recruitment of scientists in the United States, according to the FBI. An affidavit, filed in federal court last year and unsealed in April, gives a deeper look into China's tactics as top US officials have increasingly warned about Beijing's espionage capabilities.
The affidavit was first reported by the Daily Beast on Monday. The word "China" is almost entirely (and purposely) redacted from the court filing, though it does appear at least once, perhaps missed in the redaction process.
An FBI special agent who specializes in counterintelligence wrote in the affidavit that the bureau was investigating a scientist in Connecticut who was "knowingly and willfully working in the United States on behalf of government-controlled and government-directed entities … for the purpose of recruiting high-level molecular geneticists and stem cell researchers to work at state-controlled universities and laboratories in [China],
and for the purpose of acquiring and transferring to those state-controlled universities and laboratories, cutting-edge molecular genetics and stem-cell research and technology developed at leading academic and private sector research platforms in the United States."
The FBI further argued that "those efforts are undertaken ... with the [Chinese] government's publicly-declared national security objectives of technology transfer and human capital acquisition."
The scientist, whose name was redacted in court documents, became a naturalized US citizen in November 2009 and spent years working in genetic research in America, most recently at a redacted school determined to be Yale University, which told the FBI it had no policy requiring researchers or professors to disclose their involvement with outside entities. The school did not respond to the Washington Examiner's request for comment.
The Washington Examiner determined the name of the scientist based on information provided in court documents, but it is choosing not to publish his name because he has not been charged.
The Justice Department, in redacting the documents, said it was doing so because it was not bringing charges against the individual, whom it suspected of acting as an unregistered agent of a foreign government. A spokesman for the US Attorney's Office in Connecticut told the Washington Examiner they had no comment.
The scientist is believed to be working at Southern Medical University in China now. Some of his time there overlapped with Yale.FBI Director Christopher Wray told Fox News on Wednesday that the bureau has more than 2,000 active investigations linked to the Chinese government.
The FBI had been investigating the scientist in question for two years before it received information from a confidential human source beginning in September 2018 that the scientist had been traveling between the US and China to try and recruit others to work at universities overseas. The source, who was not paid for the information, indicated someone from the Chinese government likely approached the scientist and tasked him with recruiting individuals in the US.
Though heavily redacted, the descriptions in the FBI affidavit almost certainly suggest that the professor was associated with China's Thousand Talents Program, revealing he was associated with efforts to recruit other scientists to share their research with or to work in China. The Homeland Security Department determined that between October 2017 and October 2018, the scientist spent 300 days outside the US.
The source also told the FBI that the Chinese ambassador to the US and a diplomat in New York would be attending a science summit in Boston with other Chinese officials who would be traveling to the US to "recruit individuals to [redacted]," the affidavit said. The scientist was one of several speakers slated to deliver opening remarks at the event.
The unredacted version of the affidavit does not name Cui Tiankai, who has been ambassador to the U.S. since 2013, or the diplomat in New York City.The Chinese Embassy denied that its diplomats in the US aided in the recruitment of scientists."The allegation is nothing but malicious fabrication," spokeswoman Fang Hong said in a statement to the Washington Examiner.

A second confidential human source, who also was not paid, told the FBI in January that the scientist's travel was funded by the Chinese government, and the scientist's behavior was "indicative of [Chinese] government backing."
The FBI said that "much" of the information it obtained from the two sources "has been corroborated by the investigation conducted by members of the FBI and other law enforcement members."A State Department spokesperson referred the Washington Examiner to the FBI, and the bureau did not respond to a request for comment.
It is not known to what extent, if any, China's ambassadors were investigated. Foreign ambassadors, such as China's envoy, enjoy "the highest degree" of diplomatic immunity, but the State Department stresses that "is not intended to serve as a license for persons to flout the law."
This case is not unique in that the Chinese government is aggressively trying to convince scientists to bring their work overseas. But the FBI noted in the court filings that the Chinese government has been taking "active steps" to hide its recruitment programs from "increasing scrutiny" by the US, directing handlers to change the way they communicate with potential recruits.
China has exploited its access to US research labs and academic institutions through its Thousand Talents Program, which seeks to recruit scientists and entrepreneurs to provide it access to intellectual property and trade secrets. The court filings show the Justice Department was scrutinizing the scientist under the Foreign Agents Registration Act and that the DOJ's FARA Unit determined he had not registered as an agent of China.
The Chinese government advised handlers "to change their communication tactics with potential recruits, directing them to use methods other than email, such as telephone or fax," court filings said, but added that handlers have continued using email as a primary form of communication despite the efforts to minimize the digital footprint.
The FBI obtained warrants to search the Connecticut scientist's email accounts and phone records, which showed his numerous communications with Chinese government representatives. The FBI also appeared to describe the professor as the president of the China Association for Science and Technology, whose website describes the group "as the bridge linking Chinese science and technology community with the Communist Party of China and the Chinese government."
The Justice Department began the China Initiative in 2018 to combat the espionage threat, and the US has arrested and charged a number of scientists who have participated in the Thousand Talents Program. At least 54 scientists have lost their jobs over a failure to disclose financial ties to foreign governments, the National Institutes of Health said earlier this month. An overwhelming majority (93%) of those cases involved funding from a Chinese institution.