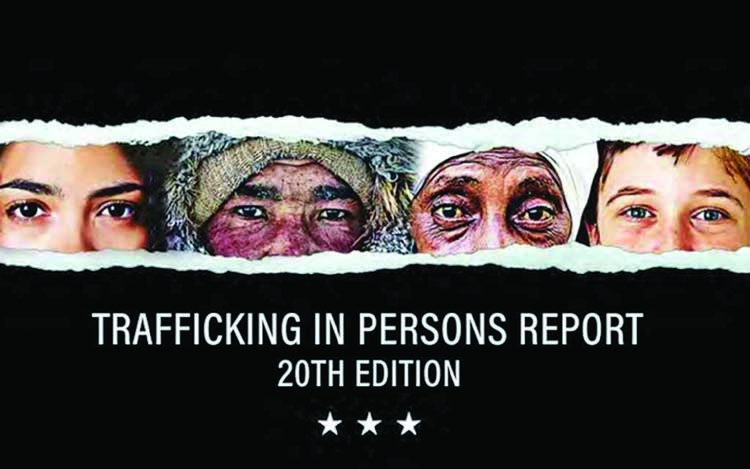 Bangladesh has secured an elevated status compared to that of the last year in a global ranking of countries with human trafficking records under a US State Department's annual study released overnight, acknowledging Dhaka's efforts to check illegal migration abroad.
According to the report in a generally three-tier ranking system, Bangladesh has been upgraded to 'Tier-2' from a "watch list" in one year as Dhaka demonstrated increased efforts in curbing illegal migration.
"The (Bangladesh) government demonstrated overall increasing efforts compared to the previous reporting period; therefore, Bangladesh was upgraded to Tier 2," said the US State Department report titled "Trafficking in Persons" released on Friday.
Afghanistan remained to be a Tier-3 country in the list for the region which kept Pakistan, Sri Lanka, Bhutan and Maldives in "Tier-2 watch list", a status one grade below the Tier-2. India and Nepal secured the equal status of Bangladesh."Bangladesh government does not fully meet the minimum standards for the elimination of trafficking but is making significant efforts to do so," said the 20th edition of the report.
Bangladesh was put under 'Tire-2 Watch List' in the last year's ranking. The report particularly appreciated Dhaka's anti-trafficking campaign exposing human traffickers to punitive legal actions setting up seven special tribunals under a tough anti-trafficking law and identifying the victims, acceding to the 2000 UN TIP Protocol.
Foreign Minister Dr. AK Abdul Momen appreciated the US acknowledgement and attributed the development to Prime Minister Sheikh Hasina's 'zero tolerance policy' against human trafficking.He said this elevation was crucial for Bangladesh as otherwise the US would have suspended non-humanitarian USAID activities in Bangladesh.
"It's a significant achievement," Momen said describing it to be the outcome of a combined effort of his office and the ministries of homes, law and expatriate welfare under a national action plan for 2018-2020 against human trafficking.The minister particularly appreciated the law enforcement and security agencies in spearheading tough anti-trafficking campaign to expose traffickers to justice in designated courts set up for the purpose alone.
Momen said the courts had dealt with 403 anti-trafficking cases and of them 312 were prosecuted convicting 25 people while the expatriate welfare ministry suspended licenses of 162 recruiting agencies for breaching laws to prevent trafficking.
He said the foreign and social welfare ministries set up shelter centers for the trafficking victims while civil society and different NGOs had worked along with the government in curbing illegal migration simultaneously.The US state department report said Bangladesh identified 585 potential trafficking victims, an increase from 419 in the previous reporting period but still much lower than the 770 victims identified in 2017.
The report, however, appreciated Bangladesh police for operating multiple centers for women and child victims of violence, including trafficking, in each of the country's eight divisions that offered short-term shelter, medical, and psychological care.