'More than I ever thought possible' 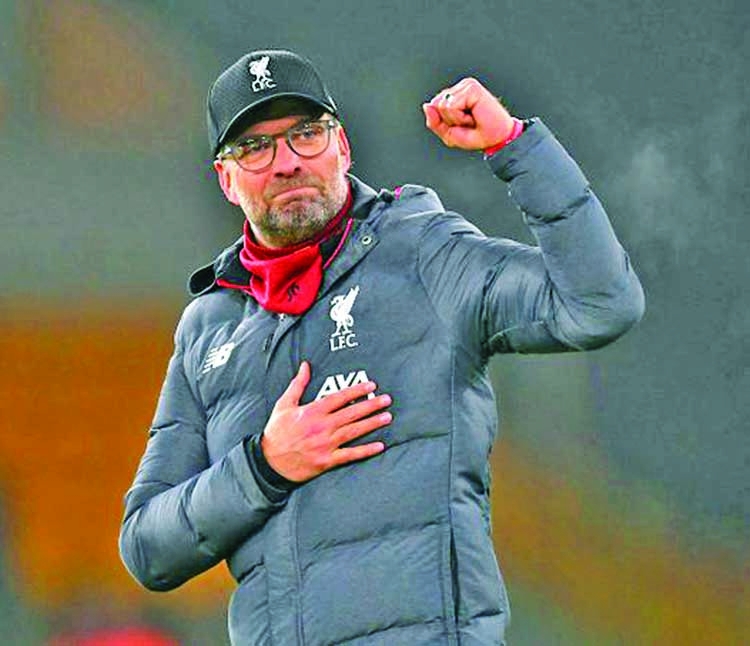 Liverpool manager Jurgen Klopp. -Twitter
Jurgen Klopp described guiding Liverpool to their first league title in 30 years as "more than I ever thought possible".The Reds were confirmed as Premier League champions without kicking a ball on Thursday as Manchester City's 2-1 defeat at Chelsea meant they could no longer be caught.
Liverpool are 23 points clear with seven games remaining."I have no words," Klopp told Sky Sports. "It's the best thing I can imagine and more than I could have ever dreamed of. It's unbelievable. Much more than I ever thought would be possible."
The German, who was wearing a Liverpool shirt during his interview and was visibly emotional, added: "Becoming champions with this club is absolutely incredible. "It is an incredible achievement from my players... and a pure joy for me to coach them."
Klopp arrived at Anfield in October 2015 following the sacking of Brendan Rodgers and with the club 10th in the Premier League. He led Liverpool to a sixth European Cup last season and has now ended an even longer wait to become champions of England. "I felt from day one when he came in the door he changed everything," said Liverpool captain Jordan Henderson.
"We followed him and believed him. It's been an amazing journey. I'm hoping there is more - we just stay hungry, keep wanting more and following him. "The biggest thing is no matter what, we all follow him, believe in him, and he's taken us to this point. This wouldn't be possible without him."
Liverpool narrowly missed out on the title in 2014 when a defeat by Chelsea at Anfield towards the end of the season allowed Manchester City to clinch the Premier League trophy instead. Last season they recorded the third-highest points tally in the division's history (97) only to be beaten to top spot by a solitary point, with Pep Guardiola's side sealing the title on the final day.
However, an incredibly dominant campaign this time around, in which the Reds have won 28 of their 31 fixtures, meant any end-of-season drama never looked likely.
A 4-0 win against Crystal Palace meant a draw or Chelsea win in their game against Manchester City would cement the championship for the Reds and when the final whistle went at Stamford Bridge there were scenes of jubilation outside Anfield, while a group of Liverpool players gathered to watch the game.
"It shows the character in the squad to get so close last time and to go again," Liverpool midfielder James Milner told Match of the Day. "We have proven we are fuelled by disappointment and learning."I am sure the hunger will stay and we want to keep being successful. It is absolutely massive - to get over the line is huge."
---BBC