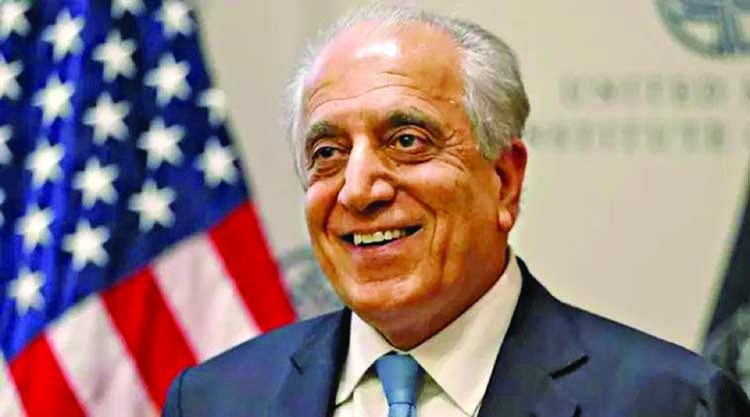 Special Representative for Afghanistan Reconciliation Zalmay Khalilzad at the US Institute of Peace, in Washington. -AP
The “shock and awe” mission of the US Special Envoy for Afghan Reconciliation, Ambassador Zalmay Khalilzad — especially his open call for India’s direct engagement with the Taliban — has created polarising waves in New Delhi.
The fact that hardly anyone questioned the premise of his proposal shows the new normal in a Trumpian world: A senior US diplomat acts seemingly as a lobbyist for an active UN-proscribed terrorist organisation in a country that sees Pakistan’s use of militancy as a principal national security threat. The proposal is being debated between proponents of Khalilzad’s suggestion and sceptics arguing its pros and cons for India.
Evident in the justifications offered by the proponents is the fatalism that a takeover by the Taliban is inevitable, and hence, the utility of appeasing the new victor. Khalilzad’s proposal has also benefited from an entrenched deference to Western authority/wisdom among a segment of Indian pundits and policy-makers.
On the other hand, the sceptics draw attention to the complexity and arduous nature of the Afghan conflict and the need for Delhi to stand its ground in supporting the post-2001 constitutional order — an order that can accommodate the Taliban as a non-violent political stakeholder.
The sceptics are not against talking with the Taliban per se, but they see little value in engaging with a group that remains fully under Pakistan’s tutelage, despite massive propaganda to show otherwise. In line with Delhi’s stated policy of supporting an Afghan-led process, the sceptics recommend following the Afghan government’s lead in engaging with the Taliban.
Khalilzad’s mission has to be evaluated within a historical context, including the US’s record and priorities in South Asia, the US electoral politics and the personal background and ambition of Trump, US Secretary of State Mike Pompeo and Khalilzad. The Doha agreement between the Taliban and the US has effectively changed the status of the post-2001 constitutional order from “at the table” to an “on the table” new reality.
Khalilzad’s colleague, former Republican strategist Karl Rove’s description of US behaviour can shed light on US’s capacity to manufacture a new reality to suit its interests: “We’re an empire now, and when we act, we create our own reality.
And while you’re studying that reality — judiciously, as you will — we’ll act again, creating other new realities, which you can study too, and that’s how things will sort out.” This imperial entitlement is often supported by other elements.
It is, therefore, unsurprising that The New York Times published an OpEd by a key member of an UN-designated terrorist group, Sirajuddin Haqqani — a piece that a former Director of Afghanistan Intelligence alleged to have been partly drafted by a well-known American scholar of Afghanistan studies.
If Israel is a key ally of the US, and Iran the chief trouble-maker for Washington in West Asia, Pakistan has been both an Israel and an Iran for the US in South Asia. But unlike Washington’s primordial hostility and obsession with Iran, Pakistan has been the centrepiece of the US’s South Asia engagement, despite occasional rhetorical admonition and half-baked sanctions.
Months before the Soviet intervention in 1979, Washington joined Pakistan in supporting the Mujahideen in toppling the Afghan government through Operation Cyclone. Days after the collapse of the Taliban regime in late 2001, the US allowed Pakistan to airlift hundreds of its captured troops from Northern Afghanistan.
In 2004, Pakistan was recognised as “major non-Nato ally” of the US. Concurrently, major Afghanistan-related political, security and defence decisions were made to appease Pakistan’s concerns.
These include downsizing the Afghan National Security and Defence Forces to a paramilitary force, promoting pro-Pakistan officials within the Afghan government and defence/security sectors, limiting India’s role to just a large NGO, and projecting the Taliban as an independent nationalistic insurgency.
Replacing the political order of the Islamic Republic of Afghanistan with the Islamic Emirate of Taliban is the culmination of two decades of Pakistan’s strategic resolve, Washington’s imperial hubris and naivety, facilitated by Afghans’ division and New Delhi’s reluctance and complacency.
Afghanistan will be at peace if and when there are a set of three mutually reinforcing pillars: A sustainable state to provide decent public goods to its citizens; inclusive democratic governance; and a supportive environment to protect Afghanistan’s status as a connector of competing external interests rather than a battlefield for proxies.
A coherent peace process should be based on the four pillars of development, democracy, defence and diplomacy. Inclusivity has to be recognised as a cross-cutting principle, coupled with a primary role for Afghan ownership and ensuing Afghan responsibility.
In a COVID-19-afflicted world and with a looming US presidential election, the aforementioned framework would attract the charge of naivety and idealism. However, the alternative would result in an Afghanistan in pieces. The Afghanistan of 1990s and today’s Syria, Iraq, Libya and Yemen are vivid examples of myopic and partisan policies.
India should play an active role in articulating and promoting a process that leaves Afghanistan at peace. Despite its structural flaws, the post-2001 constitutional order has the capacity and legitimacy to become the basis for an inclusive peace process. India must come up with ideas and structures in the fields of development, politics, security and diplomacy.
Similar to Iran’s tenacity and resolve in supporting the UN-recognised Syrian government, India can and should champion an inclusive, multifaceted and Kabul-centric peace process. Despite an adventurist temptation, “Afghanistan in pieces” is a nightmarish outcome for many stakeholders and even the Pakistan military establishment.


The writer is Director General of Afghan Institute for Strategic Studies
Courtesy: The Indian Express