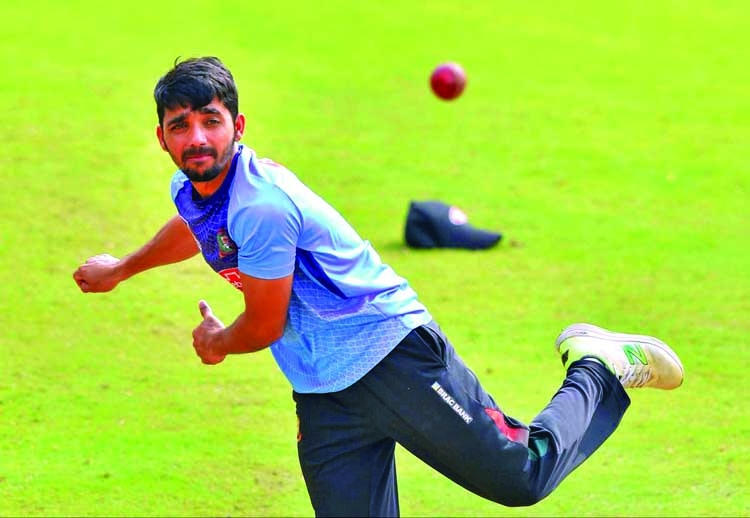 Bangladesh Test captain Mominul Haque in action during a training session. -PTI
Bangladesh Test skipper Mominul Haque didn't give up the hopes of improving the standard of their longer version format cricket despite the outbreak of Covid-19 forced the postponement of the country's as many as eight Test matches as well as forced them to live without cricket.
The Tigers who often complained of not getting enough Test matches, which, they also believe put an adverse impact on their longer format cricket, was elated to get so many Test matches in just one year.
Moreover they were happy to get back into the groove after a disappointing India and Pakistan tour, by crushing Zimbabwe in a one-off Test in February this year. A good performance against Zimbabwe made Bangladesh confident of doing well in Pakistan too, where they were due to play a Test.
"This was disappointing as we were in good touch after the Zimbabwe series. A good win always makes you confident, so we are upbeat to do well against Pakistan," Mominul told the BSS in the capital on Saturday."But what can we do? The situation is out of control. There is no way to play cricket when the whole world is combating against a deadly virus."
The second Test in Pakistan, with which they were set to end the three phase tour of Pakistan, was postponed due to the outbreak of coronavirus worldwide. Subsequently Bangladesh's two each Test at home against Australia and New Zealand, three Tests against Sri Lanka in away were postponed.
In between their England and Ireland tour in which they were due to play a three-match ODI and four-match T20 series against Ireland was also postponed. "We were not consistent in Test cricket because we've never got the chance to play Test cricket consistently. We hardly played three or four Test matches in a year and sometimes played Test matches after a long gap. This was the barrier to do well in this format," Mominul said.
"It was good news to have so many Tests in just one year. Honestly we were elated and thought that we can now put a consistent performance in the longer version format to make us consistent in this format also," Mominul remarked. "The positive side is that those eight Tests are the part of ICC Test Championship and so there is no chance that we won't get the opportunity to play those matches," he added.
Mominul, considered a Test specialist, was appointed captain in this format after Shakib Al Hasan was banned from the cricket by ICC. The starting was not happier one for Mominul as Bangladesh lost three Test matches in a row against India and Pakistan and that too by innings margin. When the things went in wrong direction, Bangladesh put up a stellar show against Zimbabwe to turn it around.
However a sudden halt from Test cricket is believed to be a confidence-breaker but Mominul didn't comply with the fact, saying that only some good sessions could help them achieve the mental and physical fitness. "We don't know when cricket begins again. It may take one year to start the cricket or even the cricket may roll onto the ground within just two months. Just we can't say when the virus would go away," he said.
"But at some point we have to start our practice session. I think skill-wise it won't be problematic for us. Some good sessions and determination is enough to help you get back to the groove, we, the players, keep practicing and doing gym at our home and hopefully fitness-wise we'll be okay."