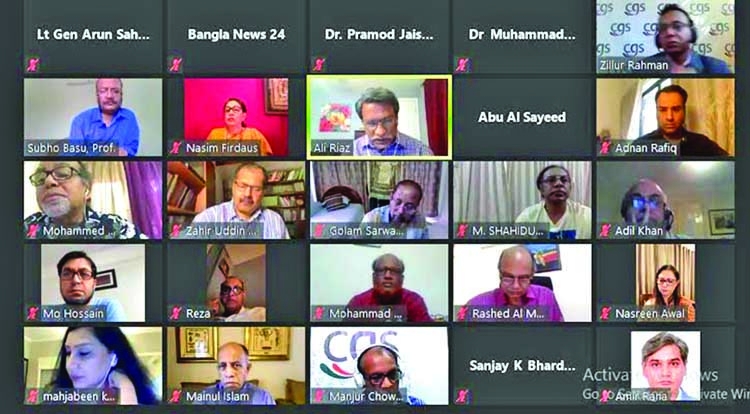 More bilateral and regional initiatives and balanced approaches to each other could ensure stability and development in South Asian nations. A revived South Asian Association for Regional Co-operation (Saarc) could be a catalyst to create a stronger bridge among the countries.
The suggestions were made at a webinar organized by Center for Governance Studies (CGS) on Sunday titled ''In the Shadow of Dragon: Globalization and Fractured Future of South Asia'' which was attended by distinguished scholars from Bangladesh, India, Pakistan and Nepal and academics from different universities from home and abroad.
Canadian High Commissioner in Dhaka Benoit Prefontaine, Norwegian Ambassador in Dhaka Sidsel Bleken and Turkish Ambassador Mustafa Osman Turan joined the function but they did not speak.
Subo Bosu, Associate Professor, Department of History and Classical Studies, McGill University, Canada presented the keynote paper. Basu, who is also an external fellow at CGS, said ''Nearly 23 percent of world's population live in South Asia. But the region has only 6 percent of world's purchasing power. It attracts only 3 percent of world's foreign investment. This region is a high concentration of absolute poverty.''
The webinar organized at a time when tension stoked on India-China border following recent clashes between the two nations. India is the major player in the Saarc region.Mohammed Amir Rana, Director of Pak Institute for Peace Studies said, ''China is growing. India is growing too.
We need to get advantages of this changing order. For South Asian nations, we need to have more bilateral and regional initiatives. Saarc, which is somehow dead, needs to be revived and operational or similar initiatives could be taken.''
The speakers stressed the need for integrity in South Asian nations. Dr Pramod Jaiswal of Nepal Institute for International Cooperation and Engagement said, ''South Asia has become less integrated than in the past. People could move freely within the sub-continent but now this not the situation.''
''The grave issues of the region like Kashmir and the border tension, India and China tension revived again and it is another setback on the progress that we have made in recent times,'' he added.
Nasim Firdaus, Former Ambassador, Founder and President of Bangladesh Alliance for Women Leadership said, ''Perhaps the time has come for rethinking globalization. The region has to rethink its connectivity following Covid-19.
Dr Sanjay K Bhardwaj of Jawaharlal Nehru University in New Delhi said, ''China wants to come into South Asia. China needs South Asia as it has 1.6 billion people. It is already there. We need to have a balanced approach.''
Dr Ali Riaz, Distinguished Professor, Politics and Government, Illinois State University; Professor Rashed Al Mahmud Titumir of Dhaka University, Adnan Rafiq, Country Director of United States Institute of Peace and former MP Mahjabeen Khaled, among others, joined the webinar.  Zillur Rahman, popular television host and Executive Director of CGS moderated the webinar.