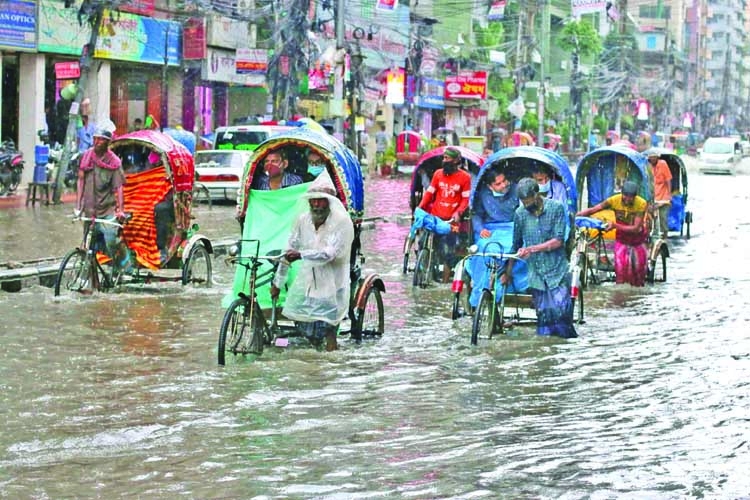 Drenched rickshaw pullers are forced to wade through the water with passengers as pedaling proved difficult in knee-deep water. -Agency
A spell of monsoon rain lashed the capital on Sunday afternoon, and it was enough to send large parts of the city's road infrastructure vanishing under water in several areas.
A number of important roads went under water after the rain, causing immense suffering to city dwellers, most of whom would have been preparing for the commute back home when the heavens opened.
That return journey will have been harrowing for most, as traffic chaos inevitably ensued with roads submerged by rain water. Bangladesh Meteorological Department (BMD) on Sunday morning forecast rain and thundershowers in most places of the country over the following 24 hours, reports UNB.
"Light to moderate rain, thundershowers accompanied by temporary gusty wind is likely to occur at most places over Rajshahi, Rangpur, Dhaka, Mymensingh, Barishal, Chattogram and Sylhet divisions," it said in a regular bulletin on Sunday morning.It forecast the same for many places in Khulna division with moderately heavy to heavy showers at places over the country. "Monsoon is active over Bangladesh and moderate over North Bay," it said.