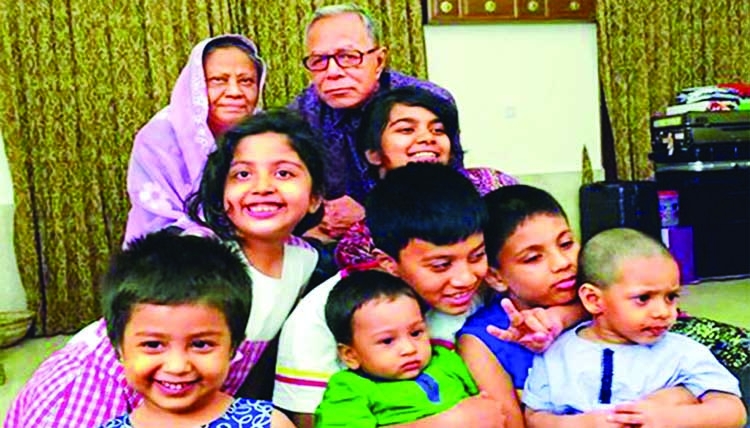 The novel coronavirus epidemic has significantly altered the course of millions of ordinary lives in Bangladesh, not least the country's President Abdul Hamid.
The head of state has been spending his days in seclusion at a forlorn Bangabhaban, limiting himself only to regular official work while strictly adhering to the health and hygiene protocols, reports bdnews24.com Amid the surge in coronavirus infections and deaths in the country, no visitors are allowed into Bangabhaban, the presidential palace. Courtesy visits or other events are also on hold.
Hamid, who has remained true to his grassroots upbringing as a politician, is never one to miss a chance to travel to his own constituency of Kishoreganj. But the rampant spread of the coronavirus means that he too must now remain housebound.
To gain an insight into the president's life during the pandemic, bdnews24.com has spoken to officials at Bangabhaban to find out how he is spending his days within the four corners of the palace and keeping in touch with the people from his hometown. Hamid spends a large part of the day reading books, according to his press secretary and other Bangabhaban officials. His grandchildren are also occupying a lot of his time.
Before the pandemic struck, the president would typically begin his day by going through newspapers in his library. But that routine has now changed as he no longer has hard copies of newspapers to read. He is, however, watching the news on television.
Also, officials read out news clippings sent from the Bangabhaban press wing to him."The president is spending time watching the news on BBC, CNN, Al Jazeera, NDTV, Sky News and local TV channels, and of course by reading books.
He is doing some official work under strict hygiene rules," Press Secretary Joynal Abedin told bdnews24.com.Hamid is spending a lot of time with his grandchildren too. Although he cannot meet them, he maintains contact with his relatives.
Bangabhaban has not been allowing anyone to meet the president for the last three months. The cabinet secretary, the heads of the Armed Forces and the IGP were the last visitors at the residence on May 26.
"President Hamid is constantly inquiring about those who have fallen sick among his friends and family. He is also keeping contact with the people in his hometown and their issues. He is following the progress of the development programmes in his constituency. He is urging everyone he is talking to follow the health directives," the press secretary said.
Hamid last visited Kishoreganj in October 2019 to inaugurate some projects there.In an event at Tarail during that seven-day visit, he recounted many anecdotes of his long and colourful political career.
"My life has reached its twilight. Most of my colleagues have left for their eternal abode," he said.A host of changes have been made to the way affairs are conducted at the president's official residence in a bid to prevent the risk of infection. Only essential staffers are being allowed to attend work regularly.
Those who need to be near the president are not allowed to live outside Bangabhaban. They work for 30 days in a row and then go back home as another group takes over for the next 30 days.All of them undergo a COVID-19 test beforehand with the Bangabhaban medical team keeping a close eye.
Since the outbreak of the coronavirus, President Hamid has left Bangabhaban only once on June 11 to attend parliament. After signing the proposal for the new budget, the president spent some time at the national assembly but there was no formal programme to mark his attendance this year.
The pandemic also disrupted the regular Eid celebrations at the Bangabhaban this year. The president usually celebrates each Eid with prayers at the National Eidgah, before returning to the Bangabhaban to exchange greetings with members of his family and government officials.But this year, Hamid attended Eid prayers at the Bangabhaban Audience Chamber alongside members of his family and 'essential' personnel.
Every Eid, the presidential palace opens to visitors of all classes and professions to mark the occasion, but the threat of the coronavirus meant that the celebrations were scrapped.Born in 1944 in Kishoreganj's Kamalpur village, Hamid began his political career by joining the Chhatra League, the student wing of the Awami League, in 1959.
He became the youngest member of the Pakistan National Assembly after being elected from the Mymensingh-18 seat in the 1970 election.After Bangladesh's independence, Hamid was elected to parliament on six occasions, having served as the speaker for two terms.
He became president of Bangladesh after the demise of his predecessor Zillur Rahman in 2013.Despite the formalities and responsibilities, the 76-year-old Hamid continues to win the hearts of the people with his warmth and a natural sense of humour.
Now in his second term, the president had compared the Bangabhaban to a prison on several occasions in the past.
Hamid had once said in an interview: "No matter how well you feed a bird in a cage, it never becomes a free bird.""I came here to perform a duty. I used to get mental motivation in the parliament, but not anymore in Bangabhaban. I can't do many things here even if I wish to."