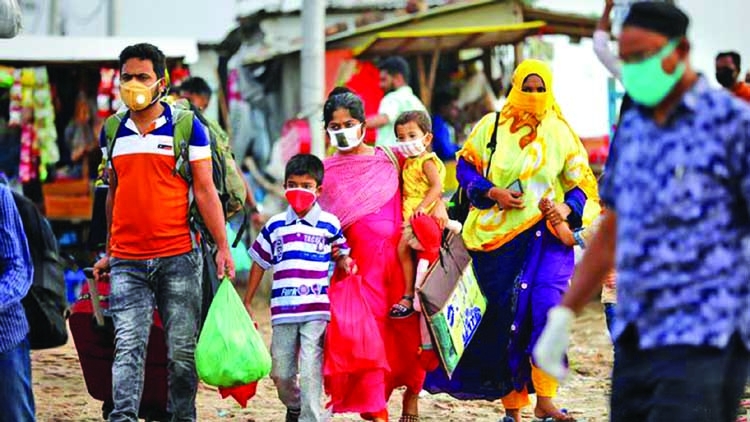 The coronavirus outbreak has left many low-income people jobless forcing them to leave capital city Dhaka. The photo was taken recently. -Agency
A great deal of residents of Dhaka city belonging to the lower-income group have started leaving Dhaka for their village homes as the coronavirus pandemic has  hammered their earnings.A good number of advertisements for house rents were seen in most parts of the city, particularly in the areas where low-income and lower-middle-income groups of people used to reside.
People who are leaving said they could not afford house rents any more in the prolonged coronavirus crisis that hit hard their income. It is being assumed that over 50,000 families have already left Dhaka while many others are waiting to depart.
House rent in Dhaka is very high and most of the tenants spend more than half of their earnings on rental expenses. The unusually high house rent was a burden for tenants even when they had regular earnings but it became too tough to go on like this when coronavirus curtailed or halted their income.
Different organizations have stated that 71% people who did odd jobs or ran small businesses have become jobless due to the shutdown imposed to tackle the spread of coronavirus. These people's income has decreased by 50% to 90% compelling them to pack up and move away from Dhaka.
Bangladesh Garment Manufacturers and Exporters Association (BGMEA) estimated that 2.28 million garment workers in Bangladesh - the world's second-largest clothing manufacturer after China - might lose their jobs as work order of $3.18 billion has been already nullified.Relevant sources have informed that around 2 crore people live in Dhaka while 90% of them reside in rented houses.
Bangladesh Bank's former Governor Dr. Atiur Rahman said to The Asian Age, "Most of the people belonging to informal and private sectors are leaving Dhaka because their livelihood has become uncertain. People who are going back to villages think that they will get assistance from their relatives in rural areas. Some people are also leaving over the fear that there is more contagion of Covid 19 in Dhaka than villages."
Former adviser to caretaker government Dr. Wahid Uddin Mahmud told The Asian Age, "Middle class and poor people are leaving Dhaka because their earnings have been greatly reduced. They cannot afford the living costs of Dhaka city anymore."
Professor Anu Muhammad, Jahangirnagar University, said to The Asian Age, "The government should have taken special care of the poverty-stricken people who live in Dhaka. These people have very little income. Under the existing circumstances, they have become totally helpless. That's why they are leaving Dhaka."