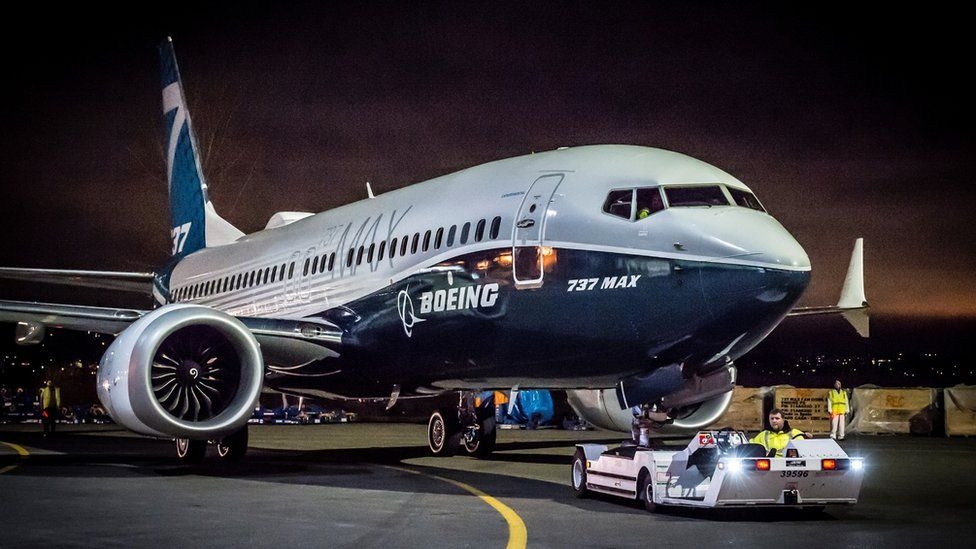 Boeing's bid to see its 737 Max return to the skies faces a pivotal week with flight safety tests expected to begin.
Pilots and technical experts from regulators and the company are understood to be planning three days of tests, possibly starting on Monday.
Boeing's best-selling aircraft was grounded last year after two crashes killed all 346 people on the flights.
The tests are a milestone for Boeing, but even if they go well, months of further safety checks will be needed.
Aviation regulators grounded the 737 Max about 15 months ago following two crashes - a Lion Air flight and an Ethiopian Airlines flight - within five months of each other.
The ruling triggered a financial crisis at the 103-year-old company, sparked lawsuits from victims' families, and raised questions about how Boeing and the US regulator, the Federal Aviation Administration (FAA), conducted their safety approval process.
Investigators blamed faults in the flight control system, which Boeing has been overhauling for months in order to meet new safety demands.
A 737 Max loaded with test equipment will run through a series of mid-air scenarios near Boeing's manufacturing base at Seattle.
According to Reuters, which first reported the news, pilots will intentionally trigger the reprogrammed stall-prevention software known as MCAS, blamed for both crashes.
The BBC understands that both the FAA, which is leading the testing, and Boeing, are hopeful that the process will get under way on Monday, barring last minutes hitches.
The FAA confirmed on Sunday in an email to the US Congress that it had approved key certification test flights for the grounded 737 Max.
The email noted that the "FAA has not made a decision on return to service" and has a number of additional steps to go, according to Reuters reports.
Test flights had been planned for last year, but investigations uncovered an array of new safety issues that have delayed a return to service.
It could take weeks to analyse data from the test flights. But even if this process is successful, further flying, training of pilots, and clearance from European and Canadian regulators will be needed.
The European Aviation Safety Agency has maintained that clearance by the FAA will not automatically mean a clearance to fly in Europe.
Norwegian Air, TUI, and Icelandair are among airlines using the 737 Max in Europe, while other carriers have the aircraft on order.
Boeing and the FAA declined to comment. -BBC