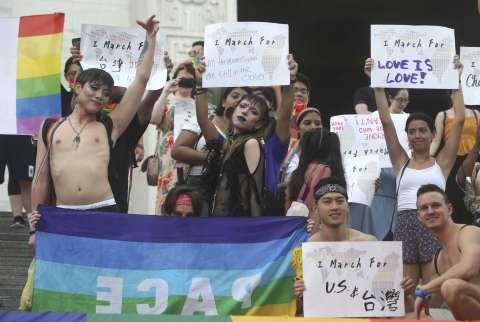 Taiwan has hosted one of the world's few gay pride marches at a time when most countries have cancelled them because of the coronavirus pandemic.
More than 200 people thronged Liberty Square in Taipei, saying they were "marching for the world" during the LGBT pride season.
Organiser Darien Chen said it was an honour to march when nearly 500 other events globally had been cancelled.
Last year Taiwan became the first place in Asia to legalize same-sex marriage.
The island normally holds its pride parade in October but brought this year's event forward to replace the hundreds of cancelled marches around the world.
Taiwan has recorded just over 440 coronavirus infections and only seven deaths. It has not seen any local transmissions for more than two months.
Mr Chen said the LGBT community in Taiwan wanted to mark the 50th anniversary of the first pride marches in the US.
"The whole world is facing the height of the pandemic," he said. "So Taiwan won't give in. and we must continue with this flame of hope and stand up for the world."
Cookie, a French drag artist who has been living in Taiwan for six years, told AFP news agency: "I'm here to march for France.
"Since the rest of the world cannot march or even go out, we have the opportunity to march for the rest of the world."