UK 'on knife edge' ahead of lockdown easing 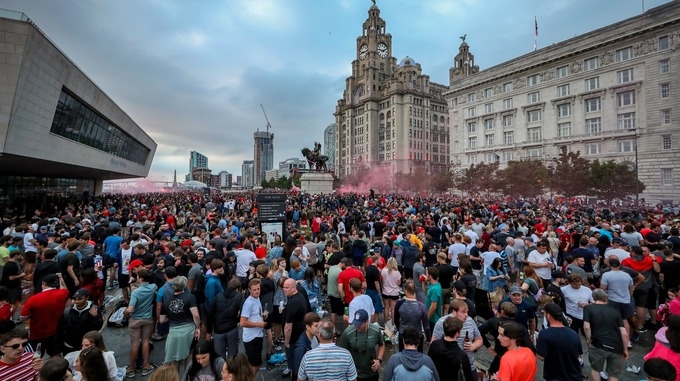 The UK remains "on a knife edge" and must act "sensibly" over the summer months to stop a second wave of coronavirus, a scientist has warned.
Sir Jeremy Farrar said he is "worried" about a surge in cases ahead of pubs and restaurants reopening next month.
Home Secretary Priti Patel said people have to be "conscientious" about the risk of a second wave.
She said the city of Leicester could face a localised lockdown after a rise in cases.
Sir Jeremy, a member of the government's Scientific Advisory Group for Emergencies (Sage) and director of the Wellcome Trust, has warned there could be a "very nasty rebound" of the virus in the winter.
He told the BBC's Andrew Marr Show: "We're on a knife edge, it's very precarious the situation, particularly in England at the moment, and I would anticipate we would see an increase in new cases over the coming weeks."
The warning comes after Prime Minister Boris Johnson announced a major easing of England's lockdown restrictions, to help to reopen the economy. Pubs, restaurants, hotels and many other businesses will welcome back customers from 4 July.
Each UK nation's lockdown measures differ, including varying rules on the reopening of food and drink outlets.
In Scotland, beer gardens and outdoor restaurants will be allowed to reopen from 6 July, and indoor areas can be used from 15 July. In Northern Ireland, pubs and restaurants can open from 3 July.
The Welsh government has promised talks with the hospitality sector about a "potential phased" reopening, but no dates have yet been given.
PM's economic recovery plan
Asked about the concerns raised by Sir Jeremy, the home secretary told the BBC that "nothing would be more damaging for our country and for our economy" than a second spike in virus cases, adding that the government's plans to ease measures were "pragmatic and responsible".
Earlier, the PM told the Mail on Sunday that if the virus was a "lightning flash", the UK is about to have the "thunderclap of economic consequences".
Mr Johnson made the comment as he set out his plans for a post-lockdown economic recovery - which will include a new taskforce to look at fast-tracking the building of hospitals, schools and roads.
The UK's coronavirus death toll rose by 36 on Sunday to 43,550. Most of the deaths were in England, while Scotland recorded no new coronavirus deaths for a third consecutive day.
The government's daily figures for virus deaths and new confirmed cases peaked in April and have been falling since then, although the downward trend is slowing.
There have been concerns about people gathering around the UK during this week's heatwave, including illegal street parties in London, Manchester and Cardiff, crowded beaches and Liverpool FC fans taking part in mass celebrations.
But Ms Patel encouraged people to go to pubs when they reopen, while urging customers to "be responsible" and follow social distancing and hygiene guidance.
Lockdown easing 'madness'
The West Midlands police and crime commissioner, Labour's David Jamieson, described the decision to reopen pubs in England next Saturday as "pure madness."
He told the BBC he feared peoples' "pent-up feeling" after three months of lockdown would "explode out onto the streets".
Mr Jamieson said senior policing figures disagreed with the government's timetable, and raised their concerns last week in a meeting with the policing minister, Kit Malthouse - but were not listened to.
He said had they been asked, they would have suggested a "mid-week" reopening date so that police could have "built up" to the weekend.
The Home Office said it trusted the public to "comply with more subtle social restrictions" and that there was "no excuse" for disorderly behaviour.
Meanwhile, the home secretary also told Andrew Marr that the government is considering imposing a localised lockdown in Leicester after 658 new cases were recorded in the two weeks to 16 June.
She said she had spoken to Health Secretary Matt Hancock about potentially enforcing a local lockdown, and said "extra support" would be going into the area.
But the city's mayor Sir Peter Soulsby said there was "no immediate prospect" of a lockdown, adding that data from testing was still being analysed.