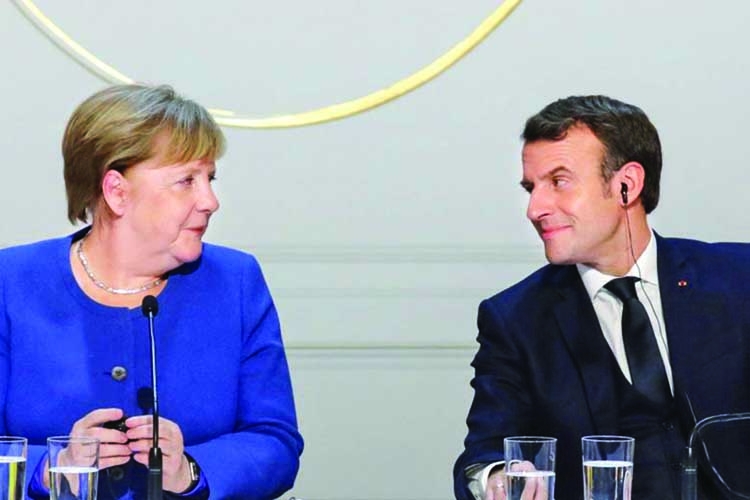 In a photo from Dec 9, 2019, German Chancellor Angela Merkel (left) and French President Emmanuel Macron speak at a news conference in Paris. -Reuters
Germany Chancellor Angela Merkel hosts French President Emmanuel Macron for talks on Monday, days before Germany takes on the rotating presidency of the European Union with the economy in the throes of the most severe storm since World War II.
Berlin's chairing of the 26-member bloc will be its last with Merkel in charge, and could be the one that defines the legacy of the leader dubbed the "eternal chancellor".
With the future of the bloc's relationship with Britain to be determined, a crucial shift to a lower carbon world in the balance and crises from Libya to Syria all jostling for attention, there is no shortage of burning issues to tackle.But the Covid-19 pandemic and the economic devastation it has wrought have become a bull in the painstakingly arranged EU china shop. "
This crisis that we're currently experiencing is different compared to any other we have experienced since the founding of Europe," Merkel, in power since 2005, told parliament in an address laying out priorities for the EU presidency. "Alone in Europe, it has claimed more than 100,000 lives. A few weeks of economic standstill was enough to endanger what we have built up over years."
With all to play for, member states are anxiously looking to Europe's biggest economy to take charge. In an interview published on Saturday (June 27), European Commission chief Ursula von der Leyen said it was "very fortunate that Germany is taking over the presidency at this time of a major crisis." Merkel's long experience and credibility "helps enormously", she told the Handelsblatt newspaper.
So high are the expectations that Germany's EU ambassador Michael Clauss said in jest they are making him "sleep badly, because I think the expectations are already a bit overstretched." "We have to act as honest brokers, otherwise we won't have the support of the council."
Besides its geopolitical weight and economic heft, Germany is taking on custodianship of the bloc with a strong hand as it has so far withstood the health emergency better than most other member states. Its economy also entered the crisis well-endowed to fight the impact.
Crucially, compared to the debt crisis that threatened to sink the single currency zone in 2009-2010, Germany looks very different today - it's out with Scrooge and in with Lady Bountiful.
Once an obstinate champion of budgetary rigour, Merkel's government has ditched its no-new-debt dogma to throw resources at the crisis. At home, its programme to shore up the economy totals more than a trillion euros (S$1.56 trillion) in spending, loans and guarantees.
Together with Macron, Merkel had sketched out the backbone of the 750 billion-euro fund proposed by von der Leyen to bolster the bloc's economy.The fund would offer grants - with no repayment obligation - to countries hardest hit by the pandemic, a major policy U-turn for Berlin.
With an eye on the devastating blow taken by the worst-hit countries like Spain or Italy, Merkel explained that it was "imperative that Germany not only thinks of itself but is prepared for an extraordinary act of solidarity".
"In such a crisis, everyone is expected to do what is necessary. And what is necessary in this case is rather extraordinary," she told the Sueddeutsche Zeitung newspaper.
The recovery fund is likely to be among the key points raised when Merkel and Macron hold talks at German government retreat Meseberg on Monday, with frugal nations such as Austria and the Netherlands sharp critics.
But observers believe that the EU's biggest paymaster Berlin will ram through a yes. "When the Germans are certain they are right, it's very bulldozer, there is no margin for discussion," a high-ranking EU official said.
An EU diplomat agreed, saying: "On the recovery fund, I expect Germany to dictate the whole process. Merkel is holding all the cards and (EU Council chief) Charles Michel will follow that.
"She also wants to get Brexit out of the way and she will always go for the deal as she wants to keep the West together. Third leg will be restoring ties with US after the election there."
Merkel, who has ruled out running for a fifth term next year, won't have much time.Brexit talks will have to be done by the end of the year, while in November, focus will be on whether US President Donald Trump, whose relationship with Merkel has been frosty at best, manages to hold on to his job.
What is clear is that Merkel's fingerprints will be all over the EU's roadmap through the next six months."This will be a very Merkel presidency, her swan song," said the EU diplomat, adding that she would be using it "to craft her legacy".
---AFP, Berlin