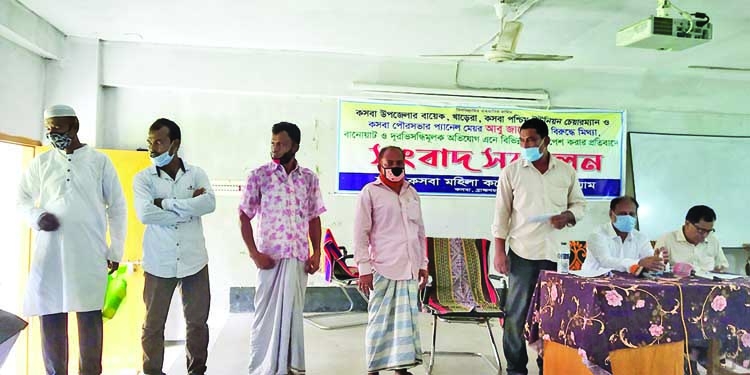 Three union parishad chairmen and one municipal panel chairman in Kasba upazila of Brahmanbaria have protested the false allegations brought against them in different offices.
UP chairmen of Bayek, Kharera and Kasba West and panel chairman of Kasba municipality v their anger at a press conference at Kasba Mohila College Auditorium on Monday maintaining social distance due to COVID-19 pandemic.
In his written statement, Kasba West Union Parishad Chairman Sayedur Rahman Manik said, "Since I was elected chairman, the opposition has been trying to defame me. In a sequel of this, they lodged complaints against me over the distribution of Prime Minister's cash aid to the distressed people.
Four persons, in whose names complaints were submitted, don't know about these. They have prayed to the deputy commissioner (DC) and Upazila Nirbahi Officer (UNO) to take against those who made complaints in their names."
The said four persons were also present at the press conference.  Besides, Bayek UP Chairman Al Mamun Bhuiyan, Kharera UP Panel Chairman Abu Saim on behalf of the chairman and Kasba Municipal Panel Chairman Abu Jaher also protested the allegations made against them by presenting evidences.  Local journalists from print and electronic media were present at the press conference.