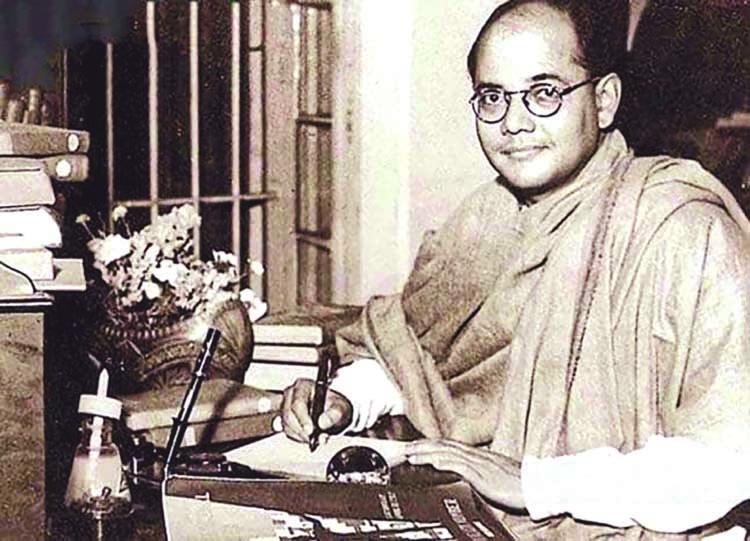 Moirang day is observed on 14th April. In 1944 on this day Netaji Subhash Chandra Bose declared Moirang as INA HQ and ordered hoisting of national Tri colour flag of Independent india in his front HQ at Moirang a mere 40 km from British stronghold Imphal.
It is on the banks of Loktak lake,s famous touristic place of Manipur. It was from this HQ that he led his war to free his motherland from the clutches of British colonialism. The day just passes unnoticed. Hrrdly anybody rememberes it. Where as it is a red letter day in the history of our subcontinent.
On this day the Supreme Commander of INA Netaji Subhash Chandra Bose took command of his Freedom Fighting Army in the liberated Indian soil at Moirang where he established his Headquarters. It is in Manipur, hardly 40km from its capital Imphal. Colonel Shaukat Malik, the Commander of the INA hoisted the tricolour on behalf of his countrymen and supreme commander of INA Subhash Chandra Bose who was declared the President of India.
He flew from Singapore to Andaman Islands, end of 1943 to set the first INA HQ in free Indian soil in the premises of notorious cellular jail where famous revolutionaries for freedom were interned. He renamed Andaman as Swaraj islands and started his war activities from there.
It was not easy to carry on warfare from such a distance. As soon as part of Indian soil became free, he established his HQ in Moirang and shifted there promptly to command his army on the Imphal -Kohima axis to break the British defense and proceed eastward through NE India to Kolkata/Delhi. A fierce battle ensued.
The picture shows me in Netaji Bhawan in Elgin Road, Kolkata during one of my recent visits there. Here in this picture you see the car which was driven by Netaji's brother Sarat Chandra Bose on the fateful night of 1941 carrying Netaji to his great escape. The journey was tedious.
They travelled across India crossing into Afghanistan via Punjab. Afterwards they travelled to Russia where Netaji failed to get support from Soviet leadership for his cause and finally he travelled to Germany/Austria. It was all to win India its freedom through armed struggle. He was trying to muster support from foreign sources who could be our sympathisers.
He did not hesitate to join hands with arch rival of British the Axis forces in WW2, the Germans and Japanese. Netaji, held a series of meetings with German high ups Himmler and Ribbentrop. In 1941 The Indian Legion was formed as a part of the German army consisting of Indian POW from Africa (who fought against Field Marshall Romel for the British Indian Army) and Indian young expatriates in Europe.
It was agreed that this Army will start fighting in the Western front of India through Afghanistan and Baluchistan after the Germans will break through Russia and Persia. But from 1941 to1943 that was not happening.
The German Indian Legion was being put into defensive positions and ancillary duties in Europe. Adolf Hitler through talks with Netaji and Japanese leadership decided that it will be better to transfer Netaji to the Japanese leadership through a very dangerous sub to sub transfer in the high seas.
This was achieved after a perilous journey. Finally Netaji arrived in Singapore and achieved success in having a common language with the Japanese leadership in fighting the common enemy British.
Ground work was laid for his Indian National Army by another veteran leader Rashbehari Bose, who has been residing in Japan for long. With the arrival of Subhash new blood was infused amongst the Indians living in South East Asia. Everyone came with what he/she had.
Backbone of the army was formed by Indian POWs held by the Japanese. The Japs supported with armaments and a truce was struck. India will be free once the war will be over.
The formation of I N A was declared officially in Singapore (a monument still stands there). INA went into action immediately. Andaman's were freed and INA HQ was shifted there in Indian soil. It was promptly renamed Swaraj Island.
On 14 April 1944 the INA HQ was shifted to Moirang, in proper Indian soil. Indian flag was hoisted and Netaji started functioning from there to free his motherland. Moirang is only 40km from Imphal. Combined forces of INA and Japanese fought on the Imphal Kohima axis for months and territories changed hands several times between the sides. The fight went on for about three months.
Unfortunately the last decisive battle was fought at the hillock of Kohima DC bungalow and the war was lost at the bayonet fight at the DC's tennis court. History depicts that Netaji's INA had to retreat after holding Moirang HQ for three months. Moirang HQ of INA is still well maintained. I was fortunate enough to visit this pilgrimage center. I urge upon you to do so. Long live Netaji's spirit! Tributes and salute to him! Our history would have been written otherwise if he had won the war.


The writer is a heritage hunter and loves travelling.