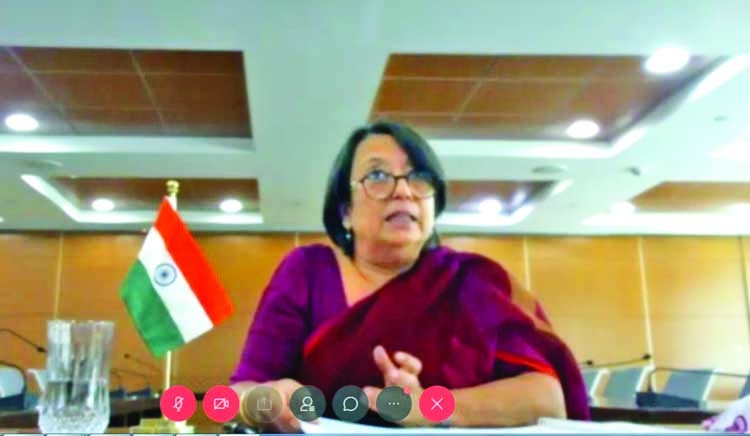 Indian High Commissioner to Bangladesh Shreemoti Riva Ganguly Das addressed a digital conference on doing business with Bangladesh on Monday.
Confederation of Indian Industry (CII) held a digital conference on "Doing Business with Bangladesh: Opportunities and Challenges" on Monday.
"India and Bangladesh have scripted a golden chapter in our partnership under the visionary leadership of Prime Minister Narendra Modi and Prime Minister Sheikh Hasina" said Shri V Muraleedharan, Union Minister of State for External & Parliamentary Affairs.
Speaking at the conference, Shri V Muraleedharan mentioned that there is a mutual desire to further strengthen the relationship in areas that will help bring benefits to people on the two sides.
He said that since 2014, there have been major developments in the bilateral relationship, including the two countries having approved the land boundary agreement, settled maritime boundary and signed agreements on connectivity.
India has increased assistance to Bangladesh, making it the largest recipient of India's concessional aid, implemented agreement to supply 1076 mega watt of power to Bangladesh, issued 7.4 million visas to Bangladeshi nationals and implemented more than 40 projects in different fields such as sanitation, waste management, restoration, health and so on.
Shri V Muraleedharan further said that he was certain that cooperation between the two nations can help overcome the economic effects of COVID-19 pandemic.
Muhammad Imran, Bangladesh High Commissioner to India, stated that the India-Bangladesh bilateral relationship now touches almost every aspect of activity including political, trade, investment, security, border, water management, power, cultural exchanges, etc.
He said that in the current coronavirus context, it is more imperative that the two countries complement and cooperate to bring great benefit to both countries in areas where they have competitive advantage.
Shreemoti Riva Ganguly Das, Indian High Commissioner to Bangladesh, emphasized that the geographical proximity and road and river water port connectivity between the two countries provide both sides many opportunities for advancement on different turfs.
She said that turning the COVID crisis into an opportunity, the Indian and Bangladesh railways have worked together to ensure smooth flow of goods through the railway links that exist between the two countries. She remarked that Bangladesh railways had increased its monthly allocation of freight trains to Indian railways by approximately thirty-three percent for the month of June which was very positive.
Sheikh Fazle Islam, President, Federation of Bangladesh Chambers of Commerce & Industry (FBCCI), mentioned that FBCCI will be entering an MoU to further expand the two countries' bilateral economic relationship. He said that there is potential for joint R&D initiatives in the technologies of future especially in the context of the COVID 19 crisis where 'new manufacturing' is becoming increasingly important.
Speaking at the Conference, Sirazul Islam, Executive Chairman, Bangladesh Investment Development Authority (BIDA) emphasized that Energy, Transport and Logistics were emerging as promising sectors between India-Bangladesh economic cooperation.
David Rasquinha, Managing Director, EXIM Bank of India said that it was encouraging to know that Bangladesh is projected to have a positive growth rate of 1.6% despite the outbreak of Covid 19 pandemic.
He stressed that economic engagement between India and Bangladesh on a bilateral level continues to witness a very substantial increase in the recent years. He added Bangladesh is the largest recipient of Indian development partnership of around USD 8 Billion and it speaks of the depth of friendship between two nations.
Chandrajit Banerjee, Director General of CII, mentioned "we, in Indian Industry, believe that a pandemic such as this only reinforces the need for us to work together and find solutions". While the SAARC Fund promotes cooperation on a G2G basis, there is much that the private sectors of the two countries can do together. CII would like to further boost its investments in Bangladesh.
Abdul Matlub Ahmad, President, India Bangladesh Chamber of Commerce & Industry (IBCCI), said that the trade and economic relations between the two countries have been growing rapidly over the last few years.
This was then followed by a Panel Discussion on "Enhancing India - Bangladesh Trade and Investments" which was chaired by P Harish, Additional Secretary (ER), Ministry of External Affairs, Indian government.
Various senior industry members participated in the discussion. P Harish emphasized on bringing down the cost of doing business and also facilitating mutual investments between the two countries and creating value chains in various sectors including textiles, leather, footwear and food processing among others.