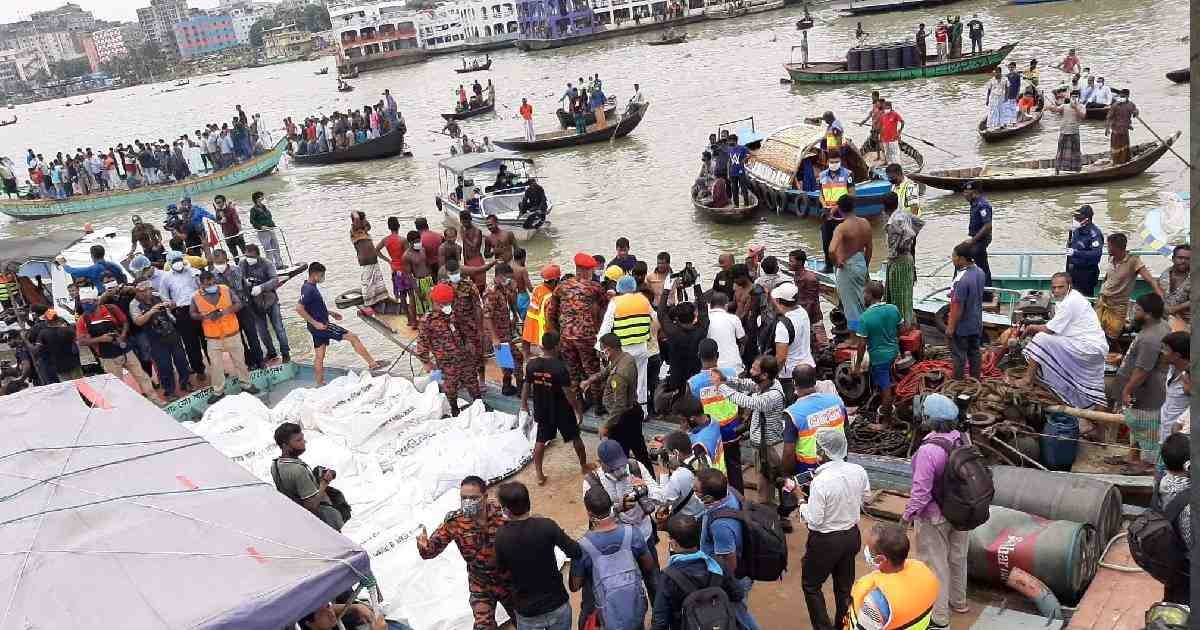 The death toll from the launch capsize in the Buriganga River near Shyambazar climbed to 32 with the recovery of two more bodies on Monday.
Lima Khanam, duty officer of fire service headquarters control room, said 32 bodies were retrieved from the sunken launch till this evening.
Twenty-nine of deceased were identified as Sumon Talukdar, 32, Islampur branch Jamuna bank official, Manir Hossain, 50, Beauty Begum, 38, Abu Taher, 50, Shahadat, 35, Moyna, 38, Moyna’s son Sajid, 12 and daughter Mukta, 14, Abu Syed, 45, Marufa, 25, Taha, 2, Sattyaranjan, 55, Shipon, 25, Golam Hossain Bhuiya, 35, Shiplu, 22, Sumona Begum, 35, Sufia Begum, 60, Golap Hossain, 50, Maniruzzaman, 45, Afzal Hossain, 44, Abu Taher, 45, Subarna Akter, 35 and Shahadat Hossain, 40, Hafeza Khatun, 38, Sadul, 34, Amir Hossain, 55, Mahim, 17, Didar, 45 and Hossain while the identities of the others could not be known immediately.
The bodies were sent to Mitford Hospital.
Shajahan Shikder, deputy assistant director (media) of the Fire Service and Civil Defence Headquarters, said that the sunken launch was traced around 11:33am.
According to the duty officer at the control room of Fire Service, the Dhaka-bound ‘MV Morning Bird’ launch from Munshiganj sank in the river around 9:33am after being hit by another launch ‘Mayur-2’ while the launch was anchored in Farashganj ghat.
On information, fire service divers rushed to the spot and started the rescue operation, said the official.
UNB Keraniganj correspondent reported from the spot that the ‘MV Morning Bird’ launch carrying over 150 passengers sank in the river.
According to witnesses, around 50 passengers managed to swim ashore with the help of locals.
However, joint director of Bangladesh Inland Water Transport Authority (BIWTA), AKM Arif Uddin, said there were 70-80 passengers in the launch and of them 30-40 managed to swim ashore with the help of local people.
A three-member probe body, headed by joint director of BIWTA Joynal Abedin, was formed to look into the incident, he said.
The committee has been asked to submit its report within three working days, said Arif Uddin
He also said the members of Navy, coast guard, river police are taking part in the rescue operation alongside fire service and BIWTA divers.
Meanwhile, Shipping Ministry has formed a seven-member probe body, headed by joint secretary Rafiqul Islam Khan, over the incident.
The committee has been asked to submit its report within seven working days.
President Abdul Hamid and Prime Minister Sheikh Hasina expressed profound shock at the loss of lives in the launch capsize.
They also prayed for the departed souls and expressed sympathy to the bereaved families.