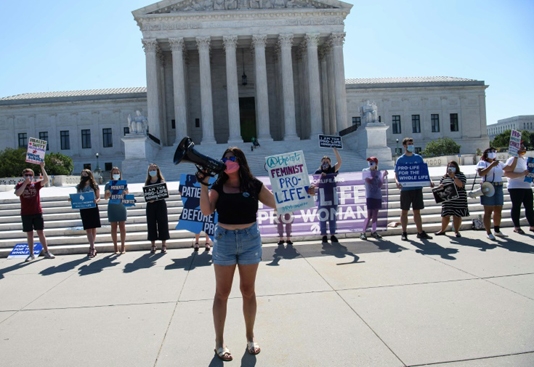 The US Supreme Court on Monday struck down a Louisiana law that tightly restricted access to abortion in the first constitutional test of abortion rights since President Donald Trump named two conservative justices to the top court.
In a key victory for abortion rights activists, the justices voted 5-4 to overrule a state law that requires doctors who perform abortions to have admitting privileges at a nearby hospital.
The Louisiana law “would drastically reduce the number and geographic distribution of abortion providers, making it impossible for many women to obtain a safe, legal abortion in the state,” the ruling said.
Right-leaning Chief Justice John Roberts sided with the court’s four progressives, frustrating abortion opponents who had hoped that Trump’s appointments had tilted the high court firmly in their direction.
But Roberts gave them hope that a different challenge to abortion rights might succeed in the future in the conservative court.
He said his decision to join with the progressives in the case, June Medical Services v Russo, was strictly on institutional grounds, and not because he believed the Louisiana law was unconstitutional.
Instead, Roberts said that he was not prepared to reverse the precedent set by the court’s 2016 decision — made before Trump’s justices arrived — rejecting an identical Texas law.
Roberts said he continues to believe that the Texas case was wrongly decided.
– ‘Unelected justices’ –
The White House sharply criticized the decision, saying “unelected justices” intruded on the powers individual states have to set policies.
“In an unfortunate ruling today, the Supreme Court devalued both the health of mothers and the lives of unborn children,” said a statement from spokeswoman Kayleigh McEnany.
“States have legitimate interests in regulating any medical procedure — including abortions — to protect patient safety,” McEnany said.
Supporters of the Louisiana and previous Texas laws had argued that clinics providing abortion services had substandard health and safety practices, an argument pro-abortion groups said was false.
Both sides saw the Louisiana case as a test of the court’s view of abortion as a constitutional right.
Abortion foes have in their sights the landmark 1973 Roe v Wade case, in which the Supreme Court legalized a woman’s right to an abortion.
“Today’s decision reaffirmed that states can’t put in place laws that unduly burden a woman’s right to make her own health care decisions — but the fight isn’t over,” tweeted Joe Biden, Trump’s Democratic opponent in the November presidential election.
Robert’s view of the actual Louisiana law, along with the four other conservative justices who opposed the decision, suggests that the court has a potentially decisive five votes supporting other restrictions on abortion.
Nancy Northup, president of the Center for Reproductive Rights, said they were relieved that the court blocked the Louisiana law.
“With this win, the clinics in Louisiana can stay open to serve the one million women of reproductive age in the state,” she said in a statement.
“Unfortunately, the court’s ruling today will not stop those hell-bent on banning abortion.”
– Court frustrates Trump –
The decision Monday kept the focus of both sides of the political spectrum on Roberts, who has been the key vote in several decisions that have frustrated conservatives and the Trump administration.
A centerpiece of Trump’s promises to his supporters was to turn the court rightward with the appointments of Neil Gorsuch and Brett Kavanaugh to the bench.
Yet earlier this month the court expanded equal protection rights to gay and transgender people, and sustained protections for certain undocumented immigrants that Trump had sought to end.
In the immigration case, Roberts also joined the four liberals in a 5-4 decision against the administration.
In the equal rights case, both Roberts and Gorsuch sided with their progressive colleagues, stunning conservatives who did not anticipate that a Trump appointee would support gay and transgender rights.