Macron stumbles at the ballot box in local polls 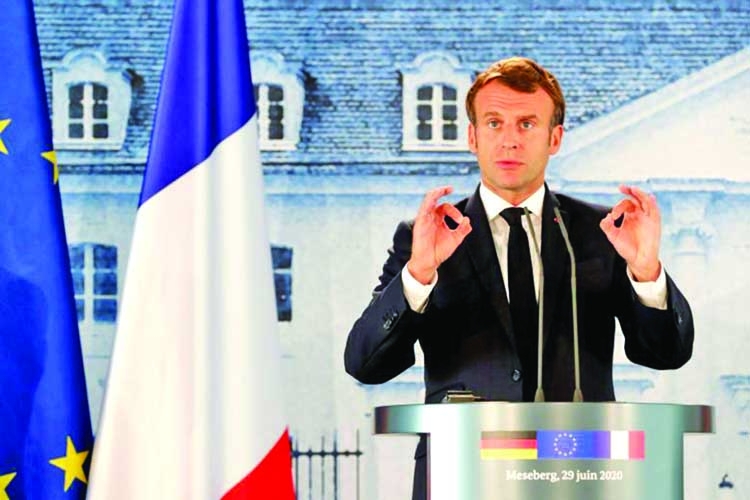 For French President Emmanuel Macron, the message from this electoral cycle is grim. -Reuters
Local elections in most other European countries are considered as just opportunities for people to register a protest vote.Not so, however, with the recently concluded local and regional elections in France, where the vote has translated into a serious rebuff for President Emmanuel Macron, indicating a more profound change in French and perhaps broader European politics, reports The Straits Times.
Under France's traditional two-round electoral system, candidates are elected outright in the first round only if they attract an absolute majority of the votes cast. If no candidate hits that target, a second round is held between the two candidates which attracted the most votes.
The first round of the nationwide local elections took place as scheduled on March 15, but two days later, France went into a strict two-month Covid-19 lockdown. As a result, the second and decisive round was postponed until last Sunday (June 28). Turnout this time was poor.
Only 40 per cent of the 16.5 million voters entitled to cast their ballots in French towns and rural areas made the effort to pick their mayors and local councillors, substantially down on the last nationwide local elections in 2014 when turnout was just over 52 per cent.
Still, an unspectacular electoral day yielded some spectacular results. Across the board, President Emmanuel Macron's ruling La Republique en Marche (LREM) party - whose name broadly translates as "The Republic Onward" - did very badly; its candidates mostly failed to be elected.
The far-right, anti-immigrant National Rally led by Ms Marine Le Pen - still regarded as President Macron's most serious rival for the next presidential elections - claimed victory in the southern city of Perpignan, the first far-right takeover of a French city of more than 100,000 inhabitants in almost three decades.


"It's not just a symbolic victory, it's a real shift," boasted Ms Le Pen. But her party did not do well at all. The National Rally managed to keep power in only eight of the 10 municipalities it won six years ago and lost around 40 per cent of its lower-level elected officials.The centre-left Socialists also claimed one major victory: Ms Anne Hidalgo, the Socialist mayor of Paris, won her re-election bid.
But apart from the capital, the Socialists did badly throughout the country, confirming the slow slide to irrelevance for a political party which alternated in power in France since the 19th century.The big winners were the Green ecologists, who ousted the Socialists in Lyon, France's third largest city, as well as captured Bordeaux, another big city which was a bastion of the centre-right.
For Mr Macron, the message from this electoral cycle is grim. His LREM party was hastily put together four years ago when he first captured the presidency, and was designed to overhaul French politics by presenting itself as a technocratic movement neither on the left nor the right of the political spectrum.Yet, as the current ballots indicate, this attempt is largely a flop.
To make matters worse for the president, Mr Edouard Philippe, France's Prime Minister, did very well in the local elections, thereby enhancing his own personal popularity. That means that Mr Philippe is now widely seen as a potential future president, not something the prickly Monsieur Macron is likely to appreciate.
And then, there is the divide between France's rural areas which tended to vote for traditional parties largely on the right, and the big cities, which are turning to the leftist Green party, leaving Mr Macron in neither camp.With two years left to run on his current mandate, President Macron can still recover his poise. Although the omens do not look good for him.