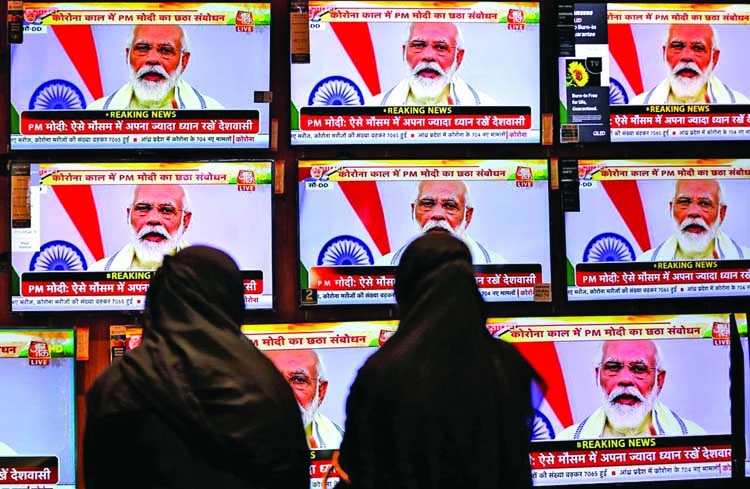 Women watch Indian Prime Minister Narendra Modi address the nation amid the spread of the coronavirus disease (COVID-19), on TV screens inside a showroom in Ahmedabad, India, Tuesday. -Reuters
The Indian government will extend a free foodgrain distribution scheme for 800 million people amid the ongoing pandemic until the end of November, Prime Minister Narendra Modi said in a national address on Tuesday.
Modi said thousands of lives have been saved because of the nationwide lockdowns in place since March 25 and urged citizens to continue to follow social distancing norms as the country restarts economic activity.
Modi said the foodgrain scheme will cost the government an additional 900 billion Indian rupees ($11.91 billion), taking the total spend on the same to 1.5 trillion rupees.
The Ministry of Home Affairs (MHA)in India  late on Monday announced fresh guidelines for Unlock 2. The restrictions will, however, be strictly enforced in containment zones till July 31.Metro rail services, schools, colleges, gymnasiums, auditoriums, bars, swimming pools, entertainment parks, theatres, assembly halls and similar places will continue to remain shut across the country.
All large congregations, including religious, social, political, sports and academic, continue to remain prohibited. Sonia Gandhi, the leader of the opposition Congress Party, suggested that the money raised should be transferred to PMNRF. Congress also suggested that the fund be used for the welfare of migrants.
On the day PM Cares was set up, a massive humanitarian crisis began to unfold in India - millions of migrant workers, some of India's poorest people, began fleeing the cities after Mr Modi imposed a sudden country-wide lockdown.
For weeks, they walked hundreds of miles, hungry and thirsty, to reach their villages. More than a 100 died. It was thought that the government would spend at least some of the money helping those forced to travel, but that did not happen, prompting one opposition MP to rebrand the fund the "PM Does Not Really Care".
There are no answers to any of these queries on the PM Cares website, and the prime minister's office (PMO), which is managing the fund, has refused to provide any information. Now opposition politicians, independent activists and journalists are asking whether the government has anything to hide?
Petitions have been filed under the Right to Information (RTI) Act and in the courts, seeking more transparency. But so far, the fund has avoided any public scrutiny by insisting that PM Cares is not a "public authority", which means it's not controlled or substantially financed by the government and so does not come under the RTI Act. It also means that it cannot be scrutinised by government auditors.
"It's absurd to say the PM Cares is not a public authority," Kandukuri Sri Harsh, a law student, told the BBC. "Millions of people did not donate to the fund thinking it's a private trust. The money has been collected upon the strength of the prime minister's name."
Mr Kandukuri was among the first to seek information with an RTI application, filed on 1 April, requesting documents on how the trust was constituted and how it's operated.
---Reuters, Mumbai