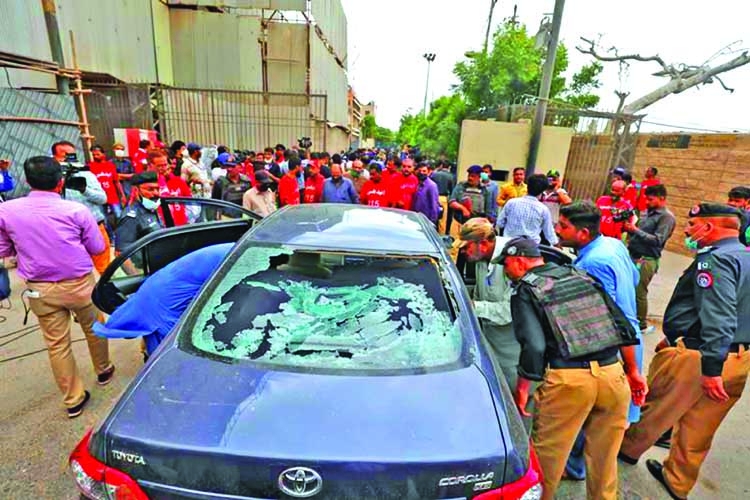 The heart line and nerve centre of Pakistan Stock Exchange (PSX), headquartered at commercial hub port city of Karachi was rattled by a deadly terror attack around 10 am on Monday June 29 when four well armed terrorists stormed into the PSX building killing four persons. The Pakistani security establishment may have heaved a sigh of relief as all the four terrorists were killed by the security forces but it too lost one sub inspector and three security guards in the bloody encounter.
What's intriguing is that all the terrorists were armed to the teeth with sophisticated firearms including AK47, grenades and modern weaponry as also they were equipped with bottles of drinking water and snacks to last for a longer period. They also carried backpacks like the terrorists of the Mumbai attacks of November 2008 did when they were state sponsored by Pakistan to hurt the Indian commercial capital.
The items carried by the terrorists would give an impression that they had planned for a longer haul which meant to lay a siege at this vital and critical infrastructure like the PSX. It was also possible that the terrorists had planned to create a hostage crisis to engage the Pakistani establishment for a bargain to press home their demands. However, that situation never arose.
Meanwhile, some knowledgeable quarters in Pakistan said that the Baloch Liberation Army (BLA) claimed responsibility for such attacks. BLA's angst against the government of Pakistan is well known in the public domain due to multiple reasons of dissent prevailing among the state of Balochistan and amongst the Baluchis. The same sources have specifically named Tasleem Baloch, Shehzad Baloch, Salman Hammal and Siraj Kungur to have carried out this surgically precise terror operation targeting the PSX.
The BLA remains upset with the Pakistan administration for its closeness to China especially for the project of China Pakistan Economic Corridor (CPEC).  It's also up in arms for the discriminatory treatment meted out to the state of Baluchistan by the Pakistani government. In the meantime, false  allegations are afoot that BLA has a tie up with India for training to carry out such terror strikes.
DG Rangers of Pakistan responsible for Sindh, Maj Gen Omer Ahmed Bokhari while addressing a press meet at Karachi soon after the incident, disclosed that the act was the handiwork of a hostile terror agency further saying that number one on the list of such suspected agencies was India's external intelligence agency.
Such allegations are likely to pick up to conceal Pakistan's own inherent failures. To illustrate a few glaring pitfalls leading to the PSX attack was a complete failure of intelligence. No actionable intelligence was available with the security forces to pre-empt this act of terror. Secondly, very recently, the US State Department had given a list of failures on part of Pakistan to contain terror.
Again, the UN not very long ago, had pointed out dos and don'ts for Pakistan to improve its anti terror architecture and refrain from indulging in cross border terror activities. Also, the Financial Action Task Force (FATF)'s advisory to Pakistan to focus on steps to arrest the terror of terror funding.
Such cautions notwithstanding Pakistan didn't pay any heed and deleted many names of  the dreaded terrorists finding mention in the list of hard-core home grown terrorists. Lashkar e Toiba (LeT) and Jaish e Mohammad (JeM) cadres seem to be having a free run and they are systematically encouraged to abet cross border terrorism specially in Kashmir.
These are definite indicators that terrorism in Pakistan has the state support as generally believed by the Counter Terror experts, the world over. Hence these suspicions are confirmed further by today's attack at the PSX.
Another important failure in today's terror attack was Pakistan's utter failure to learn a lesson from the terror attack at the Chinese Consulate one and a half year ago in Karachi where coincidentally,  or otherwise, more or less a similar modus operandi was employed by the terrorists.
While Prime Minister Imran Khan, Chief of the Army Staff, General Bajwa and others in the government have condemned the PSX terror incident, the government has also been vehemently criticised by the opposition political parties like PML (Nawaz) who have blamed the government for its inability to tackle terror. They even claim that terror scene was not so grim during the rule of Nawaz Sharif.
The blame game will remain afloat as the Karachi attack has shaken the government specially the ISI, which supports the terrorists for selective targeting. It's high time Pakistan looks within its own weaknesses including the intelligence arm and fortify its anti terror citadel before shifting the blame to others. It should also heed the recent observations of the US State department, UN and FATF to rein in the menace of terror and terrorists.
In another over a month (August 18), Prime Minister Imran Khan will be completing two years of his Premiership. And to take a look at his report card, his marks obtained seem to be the lowest in containing terror. This is not a good scene for Pakistan's neighbours or for the world.


The writer is a security analyst and a freelance columnist on matters
of geo political interest. Views expressed are personal