Record 64 deaths in one day 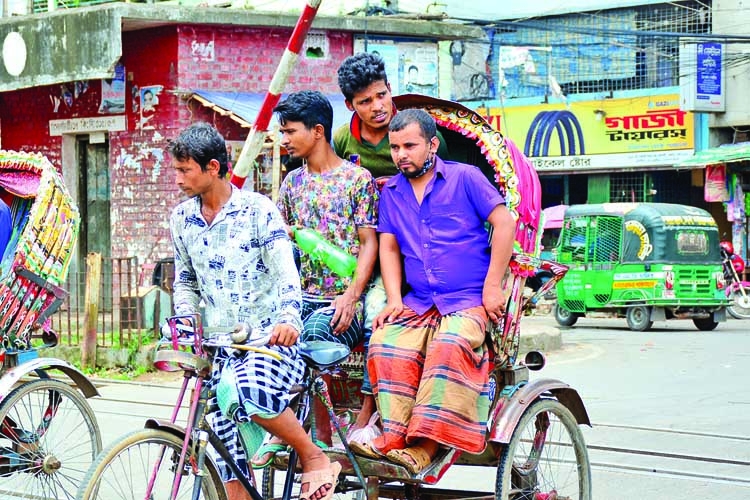 Bangladesh on Tuesday recorded 64 deaths from deadly Covid-19, the highest for one day. Despite intensity of the virus, many people are still unaware of face masks and health guidelines. The snap was taken from capital's Kawranbazar on Tuesday. -Mosta
The deadly novel coronavirus has taken the lives of 64 more people in Bangladesh, the highest for one day, raising the total to 1,847. Moreover, the pathogen has infected 3,682 more individuals too surging the total to 145,483. With the updates, the current death rate stands at 1.27 percent and the infection rate reaches 19.98 percent.
Bangladesh remains the 17th worst affected country in the world in terms of the number of cases. The Directorate General of Health Services (DGHS) came up with the information at the regular health bulletin in the capital on Tuesday.
Professor Dr Nasima Sultana, additional director general of DGHS addressed the briefing, as she has been doing of late, and said, ''As many as 18,426 samples were tested in 66 authorized labs throughout the country. Of them, 3,682 were found to be Covid-19 positive.'' Of the 64 fresh deaths, 52 were male. Most of the deceased were from Dhaka and Chattogram divisions. As per age categories,

The killer virus, which broke out in the Chinese city of Wuhan in December last year, has so far killed at least 508,600 people across the globe. It has infected more than 10,429,000 people in 213 countries and territories plus two international conveyances.

The UK has counted at last 43,500 deaths, the highest in Europe, followed by Italy with at least 34,700 casualties. France has lost at least 29,800 people followed by Spain with at least 28,300 casualties. Belgium has so far reported more than 9,700 deaths, followed by Germany with no fewer than 9,000 deaths while Iran has counted at least 10,600 fatalities.
Canada has lost at least 8,500 citizens followed by the Netherlands with at least 6,100 casualties. China, the epicenter of the virus, has so far recoded as many as 4,600 fatalities.
Pakistan has so far reported at least 4,300 deaths and more than 209,000 infections. Sri Lanka has recorded only 11 deaths and 2,042 infections.The World Health Organization (WHO) has declared the Covid-19 a pandemic. The outbreak of the virus has brought almost the entire world to an impasse.