Biden says will not hold campaign rallies due to pandemic 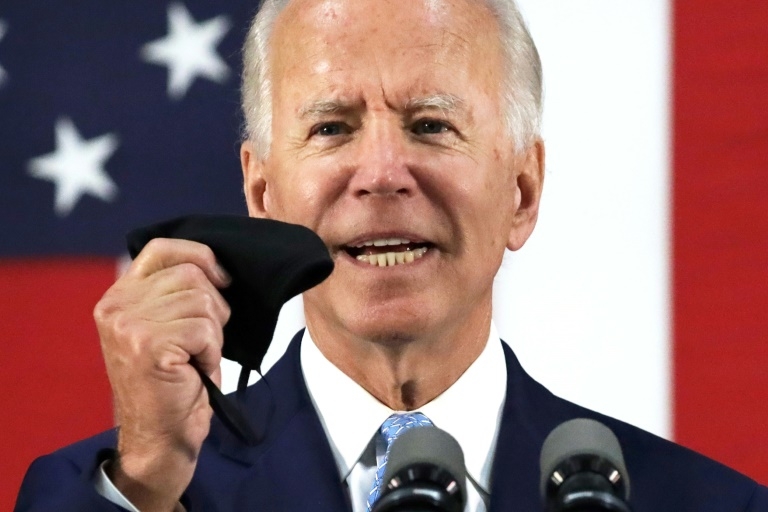 US Democrat Joe Biden said Tuesday he will not hold presidential campaign rallies during the coronavirus pandemic, an unprecedented declaration that stands in stark contrast with Donald Trump who has already held large campaign gatherings.
Biden also ramped up his criticism of the president's handling of the pandemic, saying Trump had "failed" the American people and "waved the white flag" of surrender in the fight against the coronavirus.
"This is the most unusual campaign I think in modern history," the former vice president said in Delaware at his first press conference since securing his party's presidential nomination nearly four weeks ago.
"I'm going to follow the doc's orders – not just for me but for the country – and that means that I am not going to be holding rallies," said Biden, adding he has not yet been tested for COVID-19.
Biden, 77, was likely referring colloquially to government guidelines that urge Americans to not to attend large gatherings, rather than a personal physician's advice.
He did not say whether his decision could change if conditions improve in the coming months.
If he avoid rallies altogether until election day on November 3, it would be an extraordinary move for a modern American presidential candidate, as campaigns are often gauged by the strength of their public messaging and enthusiasm.
The announcement comes amid growing alarm about America's inability to contain a crisis which has already killed more than 127,000 people nationwide.
Top infectious disease expert Anthony Fauci warned Congress Tuesday that daily infections could more than double to 100,000 without a sufficiently robust response.
Biden in his speech attacked Trump on multiple fronts, including his professed ignorance of an alleged Russian program to pay the Taliban bounties for killing US troops in Afghanistan.
The New York Times reported that the Russian threat was described in the president's written intelligence daily brief in late February.
"So the idea that somehow he didn't know or isn't being briefed, it is a dereliction of duty," Biden said. "And if he was briefed, and nothing was done about this, that's a dereliction of duty."
Biden also accused Trump of peddling "propaganda" on the administration's virus response instead of crafting a national battle plan.
"Donald Trump failed us. Month after month, as many of us urged him to step up and do his job, he failed us," Biden said.
Trump has repeatedly downplayed the COVID-19 threat, and defiantly held crowded indoor events this month in Oklahoma and Arizona where most supporters did not wear masks.
Trump has made clear he wants to return to campaigning, but on Tuesday his team said it had no new dates or locations to announce.
Biden said he would miss the personal connections that he makes out on the trail, something for which the veteran Democrat is well known.
The few events he has held have been small, with participants wearing masks and Biden's physical interactions with voters kept to a minimum.
"You know me: I'd much rather be out there with people because that's where I get the greatest feel," he said.
Instead, most of Biden's campaign since March has been virtual, as he undergoes the challenging task of seeking to project engagement through remote interviews, online gatherings and television appearances from his Delaware home.
But he suggested that such a process has helped him connect with voters in an unprecedented way.
"They tell me 200 million people have watched what I have done from home and the half dozen things we've gone out and done," Biden said.
"And so the irony is I think we're probably communicating directly, in detail, with more people than we would have otherwise."
Biden is currently leading in polling nationally and in several swing states like Michigan, Wisconsin and Pennsylvania that voted for Trump in 2016.
He said he was on track to announce his vice presidential pick in early August, a few weeks before the Democratic National Convention.
Biden will formally accept his party's nomination at the convention in Milwaukee, Wisconsin, although large parts of the event will be held online.--AFP