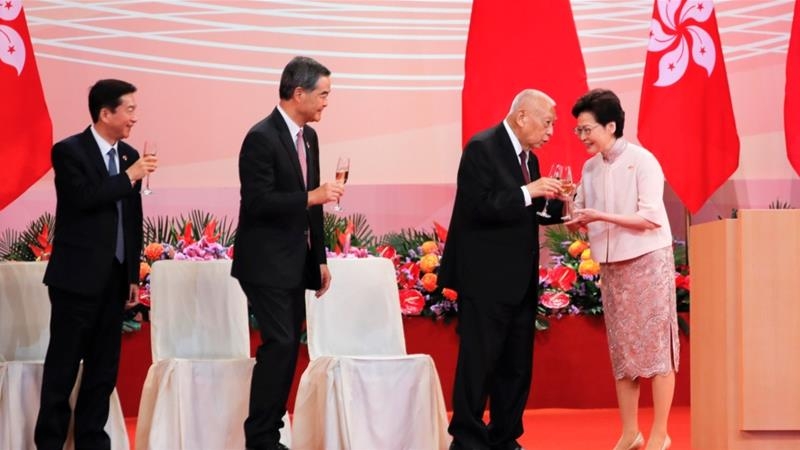 Hong Kong marks the 23rd anniversary of its handover to China on Wednesday under the glare of a new national security law imposed by Beijing, with protests banned and the city's cherished freedoms looking increasingly fragile.
The anniversary comes a day after China passed a sweeping security law for the city, a historic move decried by many Western governments as an unprecedented assault on the finance hub's liberties and autonomy.
Activists have called on people to defy a ban on protests and march through the city's main island on Wednesday afternoon.
But it is unclear whether Hong Kongers will heed that call given the risks posed by the new security law – which came into effect overnight – and increasingly aggressive police tactics towards even peaceful gatherings in recent months.
The July 1 anniversary has long been a polarizing day in the semi-autonomous city.
Beijing loyalists celebrate Hong Kong's return to the Chinese motherland after a century and a half of what many considered humiliating colonial rule by Britain.
But democracy advocates have used the date to hold large protests as popular anger towards Beijing's rule swells.
During last year's huge pro-democracy demonstrations, the city's legislature was besieged and trashed by protesters.
Hong Kong leader Carrie Lam is expected to attend a flag-raising with mainland Chinese officials on Wednesday morning with thousands of police on standby and security barriers around the venue.
For the first time since the ceremony began 17 years ago, authorities have banned the annual July 1 democracy march, citing fears of unrest and the coronavirus – although local transmissions have ceased.
Ahead of the 1997 handover by Britain, authoritarian China guaranteed Hong Kong civil liberties – as well as judicial and legislative autonomy – for 50 years in a deal known as "One Country, Two Systems."
The formula helped cement the city's status as a world-class business hub, bolstered by an independent judiciary and political freedoms unseen on the mainland.
Critics have long accused Beijing of chipping away at that status, but they describe the security law as the most brazen move yet.
Passage of the legislation was speedy and opaque even by Beijing's standards.
The law was passed in just six weeks, skipping Hong Kong's fractious legislature, and the precise wording was kept secret from the city's 7.5 million inhabitants even as it came into effect.
The law was finally published on Tuesday night. It outlaws subversion, secession, terrorism and colluding with foreign forces to undermine national security with sentences up to life in prison.
The new suite of powers radically restructures the relationship between Beijing and Hong Kong, toppling the legal firewall that has existed between the city's judiciary and the mainland's party-controlled courts.
China will have jurisdiction over "serious" cases and its security agencies will also be able to operate publicly in the city for the first time, unbound by local laws as they carry out their duties.
The United States, Britain, the European Union and the United Nations rights watchdog have all voiced fears the law will be used to stifle criticism of Beijing, which wields similar legislation to crush dissent on the mainland.
But Beijing says the law will restore stability after a year of pro-democracy protests and will not end Hong Kong's freedoms.
Popular anger towards Beijing exploded last year during seven consecutive months of huge and increasingly violent pro-democracy protests.
Millions took to the streets while a smaller hard core of protesters frequently battled police in vicious confrontations that saw more than 9,000 arrested.
The protests were initially sparked by an eventually scrapped law allowing extraditions to the mainland.
But they morphed into a popular revolt against Beijing's rule after years of concerns that Hong Kong's freedoms were being eroded.--AFP