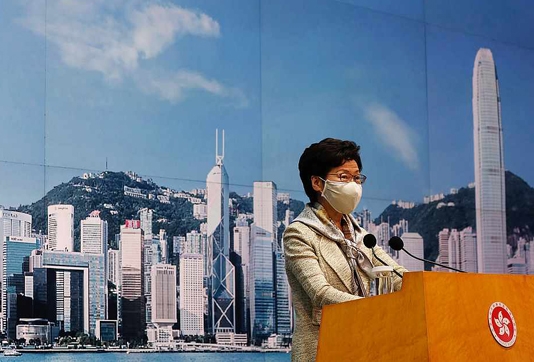 Hong Kong’s leader on Wednesday hailed a sweeping national security law imposed by Beijing as the “most important development” since the city was handed back to China.
“The legislation of the national security law is considered the most important development in relations between the central government and Hong Kong since the handover,” Chief Executive Carrie Lam told dignitaries at a ceremony marking the 23rd anniversary of the city’s return to Chinese rule.
“The national security law is a turning point for Hong Kong from chaos to being governed well,” she added.
Lam was speaking a day after China unveiled the law to semi-autonomous Hong Kong’s 7.5 million residents, a historic move decried by many Western governments as an unprecedented assault on the finance hub’s liberties and autonomy.
It outlaws subversion, secession, terrorism and colluding with foreign forces to undermine national security with sentences of up to life in prison.
The new suite of powers radically restructures the relationship between Beijing and Hong Kong, toppling the legal firewall that has existed between the city’s judiciary and the mainland’s party-controlled courts.
China will have jurisdiction over “serious” cases and its security agencies will also be able to operate publicly in the city for the first time, unbound by local laws as they carry out their duties.
Twenty-seven countries, including Britain, France, Germany and Japan, urged Beijing to “reconsider the imposition” of the legislation, saying in a statement to the UN Human Rights Council that it “undermines” the city’s freedoms.
The United States has threatened new countermeasures.
But Lam — a pro-Beijing appointee — rejected concerns the law will end Hong Kong’s freedoms.
In her speech on Wednesday, she said the law “will not undermine Hong Kong’s judicial independence and high degree of autonomy, and won’t affect the Hong Kong people’s freedoms and rights.”
She described criticism of the law by foreign governments as “smearing and vicious attacks” and she thanked China’s leaders for keeping faith in her after last year’s huge and often violent pro-democracy protests.