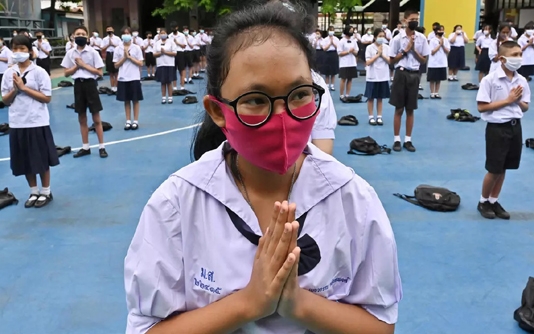 Mask-wearing pupils catching up with friends at one Bangkok high school were quickly told to spread out as they headed back to lessons on Wednesday after months of distance learning due to coronavirus restrictions.
The teenagers, resuming classes along with all other public school students in the kingdom, chatted animatedly before being called to sit in widely spaced rows for the opening session.
The school principal, Arwuth Meekhanphet, warned them all to closely follow new hygiene rules, which included the face coverings and social distancing.
“You never know whether you or your friend has it,” he said into an intercom.
Thailand has recorded more than 3,100 coronavirus cases and 58 deaths — a low toll considering it became the first country outside China to detect an infection, in mid-January.
Ahead of Wednesday’s nationwide resumption of classes, authorities recommended that class sizes be restricted to 20-25 students while doorknobs, desks and other areas at risk of spreading infection be sanitised frequently throughout the day.
Student Parichat Klanpumisri said she was not concerned about catching the virus, but reported feeling nervous about meeting up with classmates again after isolating for so long.
“I haven’t met anyone for a long time and the atmosphere of the classroom and internet learning is so different,” the 17-year-old said.
The country’s nightlife will also come back to life Wednesday, with bars, clubs and massage parlours, which are sometimes fronts for brothels, expected to reopen in the evening.
However, authorities have said there should be “no sex trade”, while extremely strict limits on social situations should be observed — such as bar patrons standing a metre apart.
Despite the push for normality in daily life, the kingdom’s cabinet on Tuesday extended its state of emergency for another month.
Authorities insist the emergency laws — which critics say could be used to target political dissent and censor the press — are necessary as they prepare to receive certain travellers such as businesspeople and medical tourists.
Premier Prayut Chan-O-Cha defended the decision earlier this week, saying the laws were not meant to curb freedoms.
Criticism of his administration has been constant throughout the pandemic, as Thailand’s already flagging economy lurched into a recession.
With tourism and export-led sectors being worst affected, the economy is expected to contract by 5-7 percent by the end of the year.