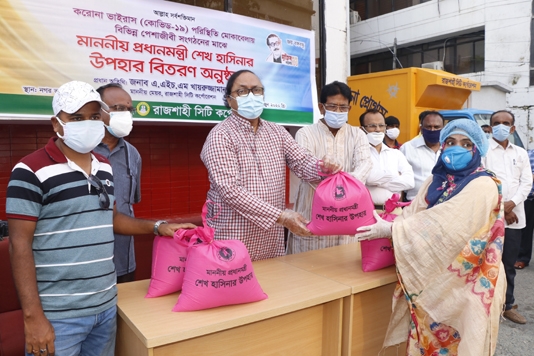 As part of its continuous humanitarian support to tackle the present pandemic situation, the government has, so far, distributed 33,896 tonnes of rice and Taka 15.04 crore in cash among the hardest hit families in Rajshahi division.
Around 47.46 lakh jobless and other worst affected families consisting around 2.14 crore people have received government’s relief assistance to overcome their livelihood related hardships being caused by the novel coronavirus (COVID-19) pandemic.
Rajshahi Divisional Commissioner Humayun Kabir Khandaker said 18,13,660 families were given 10 kilograms of rice each free of cost while another 9,18,070 families got Taka 1,000 each for baby food purposes and necessary other expenses in all eight districts under the division till Tuesday since the pandemic began.
A total of 1,404 tonnes of rice and over Taka 74.18 lakh in cash are in the stock at present for distribution in line with the government’s relentless efforts of coping with the present troubled situation through reaching food support to the needy families, he added.
Besides, around 20.14 lakh distressed and vulnerable families consisting around 90.62 lakh people have, so far, received Open Market Sale (OMS) rice in the division to mitigate their crisis caused by the pandemic.
The Department of Food has distributed 10,069.15 tonnes of rice at Taka 10 per kilogram under the government’s OMS programme through 155 appointed dealers in all eight districts in the division till Tuesday last.
Regional Controller of Food Raihanul Kabir said the OMS programme is being conducted in city, district headquarters, pourasabha and union levels since April 5 to cope with the COVID-19 pandemic situation.
Around 13,569.08 tonnes of flour have also been distributed at Taka 18 per kilogram among the families in need through 48 dealers under the OMS programme in the division till the same period.
Apart from this, 4,500 tonnes of rice are also being distributed among the needy families under the Vulnerable Group Development (VGD) programme. Each of 1.5 lakh beneficiary families is getting 30 kilograms of rice every month free of cost.
Meanwhile, Rajshahi City Corporation (RCC) has, so far, distributed 239.80 tonnes of rice among 31,324 deserving people of 157 organizations as the gift of Prime Minister Sheikh Hasina and as a part of the government’s instant humanitarian support to relieve the livelihood related hardship.
It has also been distributing foodstuffs among around 300 distressed COVID-19 patients in the city areas since Sunday last.
Earlier, the city corporation has distributed various types of foodstuffs like 325.33 tonnes of rice, 58.68 tonnes of pulse, 58.45 tonnes of potato, 15.08 tonnes of flour, 17 tonnes of fine and aromatic rice, 11.2 tonnes of sugar, 11,250 packets of vermicelli, 39 tonnes of pumpkin and 4.52 tonnes of spinach to tackle the pandemic situation.
It has also distributed 1,394.85 tonnes of rice, Taka 48.12 lakh in cash and 145 cartons of baby food among the badly affected families as part of the government humanitarian assistance to handle the present troubled situation.