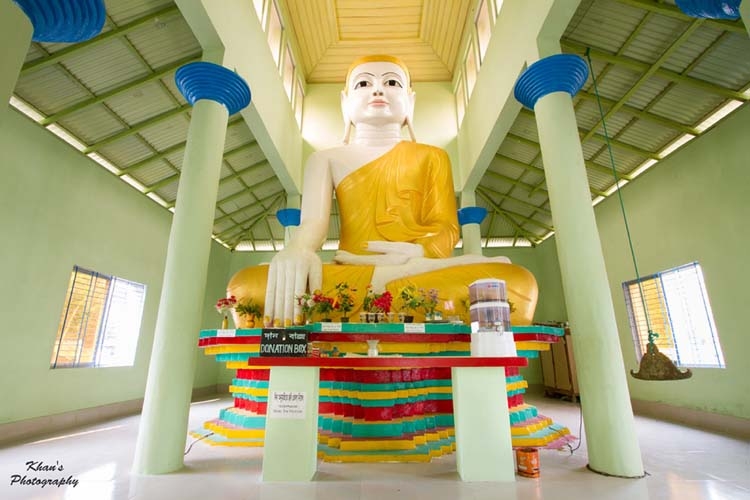 Jagannath Dev Mandir is one of the ancient temples in Comilla district. King of Tripura built it. It was named 'Moharaja Radha Kishor Manikuo Bahadur' during the 16th century. The gods Jagannath, Balabhadra and Subhadra were worshiped here.
Initially, the statue of gods were at Tripura temple but later it was been shifted here. Wikipedia mentioned this as Saptratna Mandir, where as the travel book writer Mustafiz Mamun has introduced this as Sotero Rotno Mandir. There might be a state of confusion regarding the name, but this temple is unique considering the other temples from Bangladesh.
The deities of Jagannath, Balabhadra and Subhadra were originally installed in a temple in Tripura from where they were subsequently shifted to this temple. The terracotta brick work of the temple is in the typical Bengal style of temple architecture. Jagannath Temple is one of the oldest temples of Comilla district. It is located two km East from Comilla town, on East Bibirbazar Road, Comilla. (5km east from Comilla dist.)
This four storied, conical shaped temple is a brick built structure, constructed on a concrete octagonal base-stone. This is the only octagonal based and shaped temple of Bangladesh, and one of its type. External wall of every floor looks like octagons and were ascended like inverted Cone. It is a single spire Temple.
I believe there were so many artistic terracotta all over this Mandir , from Top to bottom. I find some of the traditional Bengal design on the outside wall of third floor- a terracotta of flower, leaves and petals. Department of Archaeology renovated outside portions of Ground and first floor. Terracotta of these two floors was ruined.
There is a rumor about this ordinary looking spiritual place. Some believes there are two more floors underground, which is filled by sedimentation from Gumti River over the years. I feel this is a weak and bogus point.
This 16th Century edifice is almost 60 feet tall. There is a tank to the West of Temple premises. That Tank could be as old as the temple. The tank is also sketched in 1863 drawing [a British Library Collecton].

How to go
Comilla has excellent transport and communication system. Comilla and Dhaka are linked by both road and railway. There is also an airport in the district, but it is not currently being used. The road distance of Comilla from Dhaka is 97 kilometers. You can take a bus from Dhaka to reach Comilla. After reaching at Comilla, take rickshaw to go to Doulatpur to visit that place

Things to do
1.    Hindu religion followers can pray in the temple.
1.    You can take photos for personal collection.

Eating facilities
If you are hungry you may search for fast food shops or restaurants nearby. You may also carry your own food.