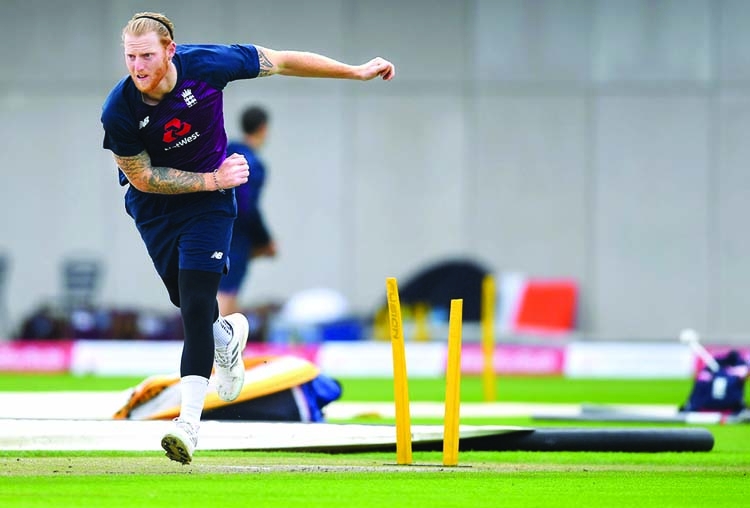 England star all-rounder Ben Stokes bowls in the nets during training session ahead of the today's decisive third Test against the West Indies at Emirates Old Trafford. -Getty
England must decide whether to recall Jofra Archer for the decisive third Test against the West Indies at Old Trafford on Friday after the fast bowler suffered online racist abuse.
Archer is available after missing England's series-levelling win at the same ground following a breach of coronavirus protocols. In a Daily Mail column published on Wednesday, the 25-year-old admitted to an error of judgement but said he had not "committed a crime".
He added some of the criticism he had faced on social media following the incident had been racist and he had reported the comments to the ECB (England and Wales Cricket Board). "I need to be 100 percent mentally right so that I can throw myself into my cricket this week," Archer wrote. "If I play and don't bowl 90 miles an hour it's going to be news."
Veteran England paceman James Anderson said skipper Joe Root and coach Chris Silverwood would have to assess with Archer whether he was "in the right place to play". There is certainly no denying the Barbados-born Archer's talent. In eight Tests since his debut last year he has taken 33 wickets at an average of 28.12, with his tally already including three five-wicket hauls.
But as they showed during their 113-run win in the second Test, England have plenty of pace bowling options, with Stuart Broad taking six wickets on his return to international duty. England have been rotating their seamers throughout a series that forms part of a gruelling schedule of six Tests, including three against Pakistan, in seven weeks.
Veteran spearhead Anderson could now return on his Lancashire home ground, having been rested from the series-levelling win, as could Mark Wood.
Meanwhile left-armer Jack Leach, who will turn the ball away from the tourists' clutch of right-handed batsmen, may be recalled in place of fellow Somerset spinner Don Bess. Someone unlikely to be rested, barring injury, is Ben Stokes.
The Durham star went to the top of the Test all-rounder rankings and number three in the batting charts with 176 and 78 not out, as well as taking three wickets, in the penultimate match of this series. "To have that talent in our team and to be able to watch it first-hand is amazing," said Anderson.
West Indies, the Wisden Trophy holders, remain in the hunt for their first Test series victory in England since 1988. "We're constantly reminding them that they've got a chance to change something that hasn't happened for 32 years," said West Indies assistant coach Roddy Estwick, whose side won the first Test at Southampton by four wickets.
While England have rotated their seamers, the West Indies could field the same pace quartet of Shannon Gabriel, Kemar Roach, Alzarri Joseph and captain Jason Holder for all three matches. Both Gabriel and Joseph left the field with minor injuries during the second Test but Estwick said: "Shannon was ready to go into the nets today (Wednesday) to have a bowl. The rain curtailed that but I think they'll be fine.
"I saw Kemar last night and he was looking fresh."
The West Indies also have the option of bringing in giant spinner Rahkeem Cornwall on a pitch expected to take turn. Batting, however, remains West Indies' major problem in a series where they've yet to post an individual hundred, although several batsmen have shown their talent with attractive fifties.
"It is disappointing," said West Indies coach Phil Simmons, who could replace members of his misfiring top order with Joshua da Silva and Shayne Moseley. "Our batsmen need to make hundreds because our bowlers have been doing their jobs."
-- AFP, Manchester