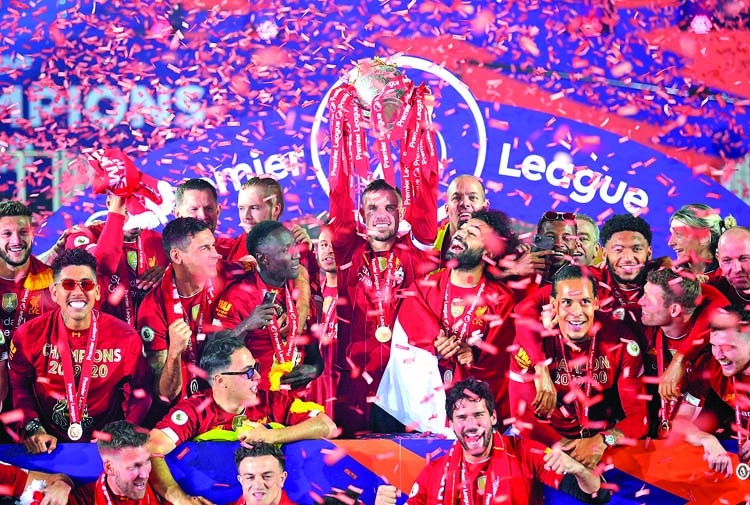 Liverpool's Jordan Henderson with teammates finally celebrates with the Premier League trophy after a thrilling 5-3 victory over Chelsea in their last home game of the season on Wednesday. -Twitter
Liverpool's players finally got their hands on the Premier League trophy on Wednesday in a muted presentation ceremony in front of an empty Kop after a thrilling 5-3 victory over Chelsea in their last home game of the season.
The club's first English title for 30 years had been sealed almost a month ago with seven games remaining, following a three-month stoppage because of the COVID-19 pandemic.
Kenny Dalglish, the last Liverpool manager to deliver the title, presented the medals wearing a red face mask before handing the trophy to captain Jordan Henderson who raised it to the night sky as fireworks and tickertape filled the air.
Sadly, because of the pandemic that interrupted Liverpool's charge to the title, the fans missed out on what would have been a momentous night at Anfield stadium.
Merseyside police had issued a 48-hour dispersal order to stop fans gathering in large numbers across the city, as they did when the title was won on June 25 when nearest rivals Manchester City were beaten by Chelsea. Many did gather outside, however, letting off flares and fireworks. Despite the sanitised ceremony in the 53,000-seater stadium, Liverpool's players did their best to fill the void, belting out a rendition of the club's anthem "You'll Never Walk Alone" along with manager Juergen Klopp and his staff. "If you don't see that we do it for you I can't help you," Klopp said when asked for his message to the fans.
"You made us happy, we all should celebrate at home. Prepare for a party and when this virus has gone we will have a party."
Liverpool chief executive Peter Moore said the players and fans will "come together to celebrate" when the time is right. "It's been an amazing season," Henderson told former Liverpool defender Jamie Carragher at pitchside. "It's been a journey, a process, and every single player has been part of it." A trophy presentation without fans was always going to feel a little flat, although the real fireworks have been provided over a sensational season by a superb Liverpool side. Liverpool missed out by a point last year to Manchester City despite losing only one game.
Although they won the Champions League title last June, the English crown is what the red half of Merseyside has craved for three decades. During that time they have watched arch-rivals Manchester United, Arsenal, Chelsea and Manchester City dominate the league.
The manner in which Liverpool took it back suggests it will not be a one-off. "This won't be the last one for this team," former Liverpool midfielder Graeme Souness said. "This club is geared to be a very successful football club, this is Liverpool back to where they were 30 or 40 years ago.
"They will be challenging for this and the Champions League for the next decade."