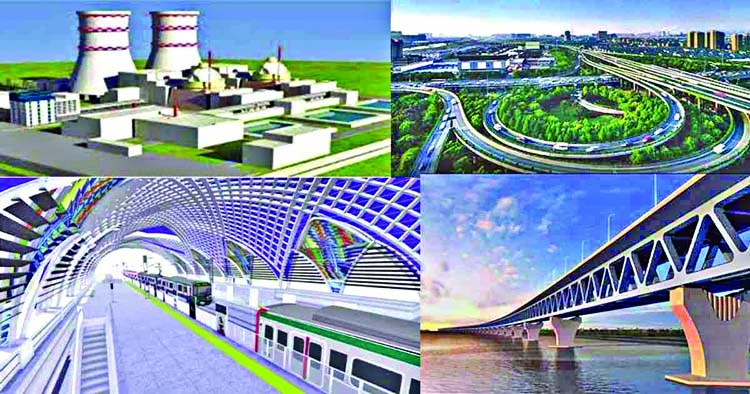 The government is going to change the main macroeconomic structure of the 8th Five Year Plan to protect people. -Collected
Amid the fast-changing scenario in Bangladesh economy due to COVID-19 crisis, the government is going to change the main macroeconomic structure of the 8th Five Year Plan to protect people.
The Planning Commission is conducting a study for assessing the impacts of COVID-19 pandemic on the economy and its findings will be reflected on the 8th Five Year Plan, according to a government document, reports UNB.
"The study will also assess the impacts of (COVID-19) pandemic on the poverty reduction programs and GDP growth activities," the document says. The work to formulate the 8th Five Year Plan has started as the timeframe of the 7th Five Year Plan expired on June 30 this year.
Bangladesh has already attained the status of lower middle-income country and established the base to preliminarily graduate from the Least Developed Country (LDC) list to that position.
The document sates that the 8th Five Year Plan will be helpful for the country to graduate from the LDC list by 2024 and implement the Sustainable Development Goals (SDGs).
In the 8th Five Year Plan, emphasis will be given on two major issues, expediting prosperity and inclusive growth in addition to giving attention to disseminating the results of growth to everyone equally.
Upholding the 'No one will be left behind' slogan, the 8th Five Year Plan will take target-oriented programs for the 'left behind people and areas' in terms of various economic and social indexes.
According to the document, the 8th Five Year Plan in its formulation process will follow the Perspective Plan 2021-2041 and the election manifesto 2018 of the government.
Sources at the Planning Commission said Bangladesh has targeted 8.37 percent economic growth on average for the 8th Five Year Plan.
The government also sought funds from development partners so that the existing growth is sustained in the plan. It will form committees to regularly monitor the progress of the next plan.
The government will focus on three issues -- job creation and GDP growth, ensuring equal opportunities for, all and tackling the adverse effects of COVID-19 and climate change, a Planning Commission official said.
The First Five Year Plan was launched in July 1973 and it was followed by a Two-Year Plan(1978-80) in the wake of global economic uncertainties. In 1980, the Five-Year Plan framework was reinstated.
There was a shift from the five-year plan to a process of shorter-term Poverty Reduction Strategy Paper (PRSP) from 2002-2003 to 2009-2010. The present government has switched back to the five-year plan returning to power in 2009.
Since the beginning of the COVID-19 pandemic, the government has taken various steps to combat its fallout. It has taken a comprehensive plan to overcome the possible negative impacts of pandemic on economy and people.
Under this plan, the government has taken measures that were necessary in the immediate term and it is implementing some in medium term. It also has taken a slew of long-term initiatives, aiming to achieve full economic recovery.
The comprehensive plan is based on four main strategies --discouraging luxury expenditures and prioritising government spending that creates job, creating loan facilities through commercial banks at subsidised interest rate for the affected industries and businesses, expanding the coverage of the government's social safety net programs.
In light of the comprehensive plan and strategies, the government has declared a number of stimulus packages to support the emergency healthcare services to protect jobs and achieve smooth economic recovery.
The economic recovery packages declared so far has totalled Tk 1,03,117 crore.