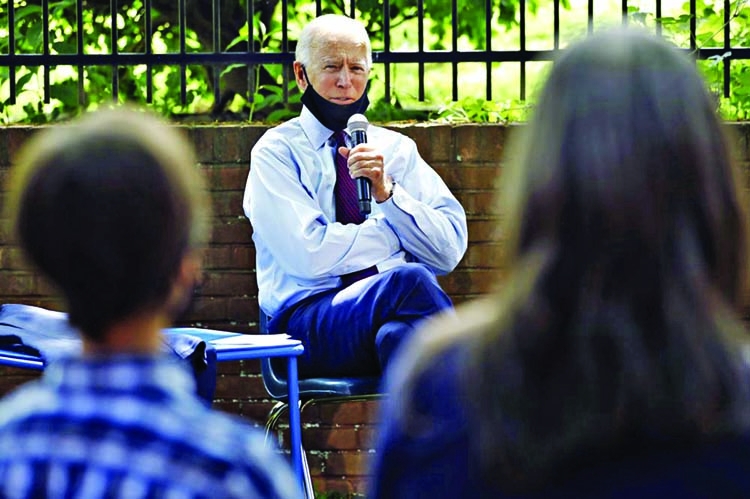 Democratic presidential candidate former Vice President Joe Biden. -AP
Joe Biden wants to address health care disparities, toughen gun control, overhaul policing, provide free community college, erase student loan debt, invest in green energy and improve the nation's infrastructure.
But that's just the start. The presumptive Democratic presidential nominee has also proposed measures to help Americans buy their first homes, raise the federal minimum wage and boost taxes on the wealthy and corporations. That's to say nothing of his massive plans tied to the coronavirus.
The reams of proposals reflect Biden's belief that the nation faces immense challenges that require a far-reaching government response not seen since the New Deal. It marks a contrast with President Donald Trump, who has struggled to articulate his second-term plans and has sometimes said the coronavirus will simply go away. But such ambition may inevitably lead to disappointment.
At a time of unprecedented gridlock, even some fellow Democrats warn Biden's lengthy to-do list faces long odds in Congress. "I think there is considerable bipartisan support for many of the principles," said Democratic Sen. Jeff Merkley of Oregon. "The higher priority for the Republicans, should they be in the minority, is to prevent Biden from being an effective president."
Democrats already control the House, but much of Biden's agenda could come down to the Senate. If Democrats win the White House.

they would need to pick up three seats in the Senate to retake the majority. Biden has predicted the party could end up with as many as 53 seats.
That's still short of the 60 votes required to past most bills in the Senate. Merkley is a leading voice calling for the removal of that threshold, known as the filibuster, and instead pass legislation with a 51-vote majority.
As a 36-year veteran of the Senate, Biden has been reluctant to end its traditions. But he's hinted his position may shift.
"You have to just take a look at it," he told journalists this month, adding that his decision would depend on how "obstreperous" Republicans become.
Senate Majority Leader Mitch McConnell has pointed to the prospect of a Democratic-run chamber to warn donors that it's vital for the party maintain its majority.
Don Stewart, a former top aide to McConnell, said the GOP can still slow major legislation even if they're in the minority. He pointed to President Barack Obama's struggles during his first term as an example of the playbook Republicans will use.
Obama came into office with a significant House and Senate majority, and Democrats still underwent months of legislative wrangling - sometimes among themselves - to hammer out a health care bill that would clear the Senate.
"It's so hard to get an agreement on something that big and broad, because of all the little things in it and all the little ways that minority can attack every little piece," Stewart said. "Between Obamacare and the stimulus, by July of Obama's first year, he went from walking on water to completely upside-down."
Beyond the health care overhaul and the economic stimulus, Obama won passage of a new financial regulatory regime early in his administration. But other top first-term priorities, such as cap-and trade legislation and immigration reform, languished.
Biden's aides say overlapping crises - the pandemic, the economic downturn and the demand for criminal justice reform - lend an urgency to reform that didn't exist when Obama was in office.
"The acuteness of the elements of this crisis just creates a different set of political winds, and we think those winds blow in the direction of fast, decisive action," said Biden senior campaign adviser Jake Sullivan.
Still, Biden may face a simple time pressure. New presidents typically have just 12 to 18 months to pass legislation before political considerations of the midterm elections take over. After that, attention quickly turns to the president's own reelection.
That dynamic will be especially intense for the 77-year-old Biden, who has faced questions about whether he would seek a second term because of his age.
More fundamentally, Biden would face resistance from most Republicans - and some Democrats - because of the steep cost of his proposals.
This month alone, Biden has rolled out plans that include a $700 billion investment in research and development in U.S. tech firms and purchasing American goods, $2 trillion on a green energy jobs and infrastructure plan and $775 billion in spending on care for children, older people and those with disabilities.
While Biden and other Democrats frequently point out that Republican tax cuts have blown a hole in the nation's deficit, and typically noisy Republican deficit hawks are notably silent with Trump in the White House, that won't likely be the case if Democrats take back control of Washington.
Biden's aides believe his decades of experience on Capitol Hill and reputation as a deal maker will help him broker compromises and build coalitions. But Biden will face the same challenge within his own caucus that complicated and sometimes sunk many of Obama's legislative pursuits: competing pressure from progressives and moderates.
Progressives like Vermont Sen. Bernie Sanders and New York Rep. Alexandria Ocasio-Cortez have been outspoken in pressuring Biden on key issues such as climate change and education.
But moderates, like West Virginia Sen. Joe Manchin, could hold the real key to passing legislation. The red-state Democrat has routinely been a key swing vote in major legislative negotiations and said he expects to be in a "great position for common sense" in the next Congress.
"I've never been a blank check for anyone," he said in an interview. "I've always said if I can't go home and explain it, I'm not going to vote for it."
Manchin is already hitting the brakes on two of Biden's major campaign promises - his support for a federally funded health care option and Biden's proposal to eliminate carbon pollution from the energy sector by 2035.
But Manchin did give Biden some credit.
"The one thing I know about Joe Biden, he's always been willing to sit down and negotiate," Manchin said. "That type of a person I know I can work with, which is all I can ask for in today's toxic environment."