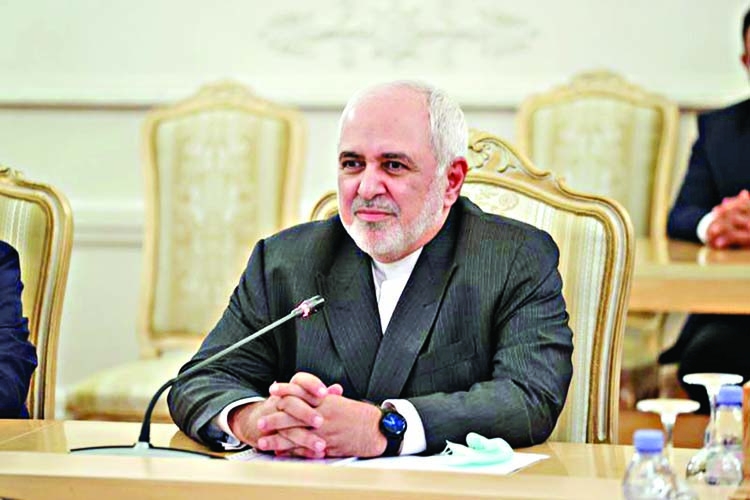 Iranian Foreign Minister Mohammad JavadZarif meets with his Russian counterpart Sergei Lavrov in Moscow. -Reuters
ran said on Friday a US fighter jet "harassed" an Iranian civilian airliner in an act of terrorism which injured and panicked passengers, dismissing a US account that the jet was merely conducting a visual inspection.
State TV video footage of the inside of the Iranian airliner shows a passenger lying immobile of the floor and another with a wounded nose and forehead, presenting his bloodied face mask to the camera. Several passengers, some seen screaming and shouting, were injured in the flight manoeuvre over Syria, according to Iranian media, but the US military said its F-15 was at a safe distance.
Iranian Minister of Roads and Urban Development Mohammad Eslami was quoted by the semi-official ISNA news agency on Friday as saying Iran had lodged a formal complaint with the International Civil Aviation Organization, describing Thursday's incident as a "terrorist act, one of aggression". "The explanations provided so far (by the US military) are unjustified and unconvincing," LayaJoneydi, vice president for legal affairs, was quoted as saying by Iranian media.
"The harassment of a passenger plane on the territory of a third country is a clear violation of aviation security and freedom of civilian aircraft."
Foreign Minister Mohammad JavadZarif accused the United States of risking a disaster.
"US ... harasses a scheduled civil airliner - endangering innocent civilian passengers - ostensibly to protect its occupation forces," he said on Twitter. "These outlaws must be stopped before disaster."
The Iranian plane, belonging to Mahan Air, was heading from Tehran to Beirut at the time. Iran's Foreign Ministry said the encounter would be investigated.
Video footage shows oxygen masks fallen from the overhead roof panels. One jet can be seen through a seat window flying some distance away in a clear blue sky.
"I saw a black plane approaching us, and then we lost our balance," one unidentified injured passenger told state TV.
"It was a jet. Almost so near our plane."
One of the passengers was lying on the floor by the toilets and another passenger put a cushion under his head as cabin crew tended to others.
The US military's Central Command, which oversees American troops in the region, said an F-15 aircraft was conducting a visual inspection of the Iranian plane when it passed near the Tanf garrison in Syria, home to US forces.
Captain Bill Urban, the senior Central Command spokesman, said the jet was 1,000 metres (3,280 feet) from the airliner.