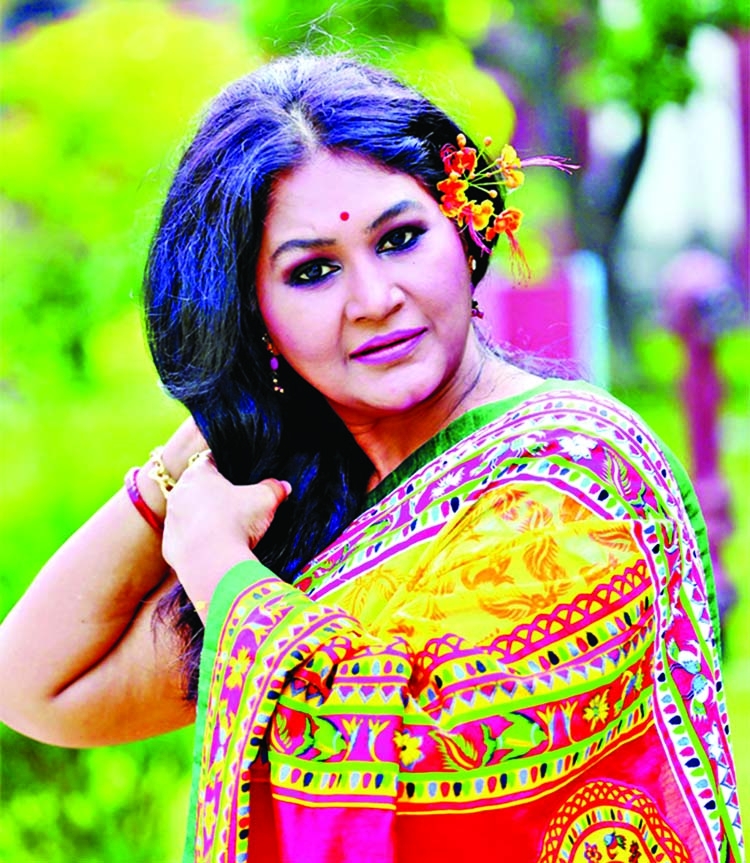 Samina Chowdhury is a pride of Bangladesh. Late singer Mahmudunnabi was one of the singers by whom the country became enrich in the field of music. Samina is his daughter who has been entertaining the music-lovers over the decades. Her fans are very much eager to hear Samina's new song but the singer is choosy in selection of song. In her voice, many songs got popularity.
"Katbe jedin jibon theke kalo andhar" is such a song rendered by Samina. Jamal Hossain wrote lyrics of Samina's new song. Ovi Akash has composed tune of the song while Sheikh Rezwan has arranged its music. Recording of the song was done on the night of July 21.
While talking about her new song Samina Chowdhury said, "Tune of the song is so melodious. Its lyrics are also nice. I have liked music arrangement of the song. There is an urge as we can survive and overcome the present situation. I talked with lyricist of the singer over mobile phone. He is very much cordial. Within very short time my song will be released on YouTube channel of Rongon Music."
SaminaChowdhury also informed that on July 20 she also lent her vocal for another song.
She remembered her play-back song with late Andrew Kishore in film 'Noyoner Alo', which was performed by late hero JafarIqbal and then popular heroine Kajori, who has been residing in Chattogram permanently now, in their lips.
She started her career as a playback singer in 1981. Her debut song was "Jonmo Theke Jolchi Mago" from the film 'Jonmo Theke Jolchi'. She continued working as a singer in the audio industry. Later, she sang the song 'SaatBhai Champa Jagore' in the film 'Saat Bhai Champa'. Then she took a hiatus from playback singing.
She returned to playback singing through the song 'Tomar Gorur Garite Ami Jabo Na', a duet with Andrew Kishore. Another rendition was 'Amar Buker Moddhyekhane'. Some of her repertoires are 'Door Deepobasini', 'Hou Jodi Oi Neel Akash', 'Hridoye Likhechi Tomari Naam' and 'Amar Majhe Nei Ekhon Ami'.
Her non-playback career includes adhunik song and Rabindra Sangeet. Some of her modern songs are 'OiJhinuk Phota Sagorbelai Amar IccheKore', 'Kobita Porar Prohor Eseche Rater Nirjoney', 'Somoy Jeno Kate Na', 'Phool Phote Phool Jhore' etc. She also released a Rabindra Sangeet album in 2009. She has sung two songs in the film 'NiswarthaBhalobasa' : 'JamunarJol' (with S I Tutul) and 'ShopnoShopno'.
Samina got the National Film Award for the first time for SaminaZaman's film 'Rani Kuthir Baki Itihas' in 2006.