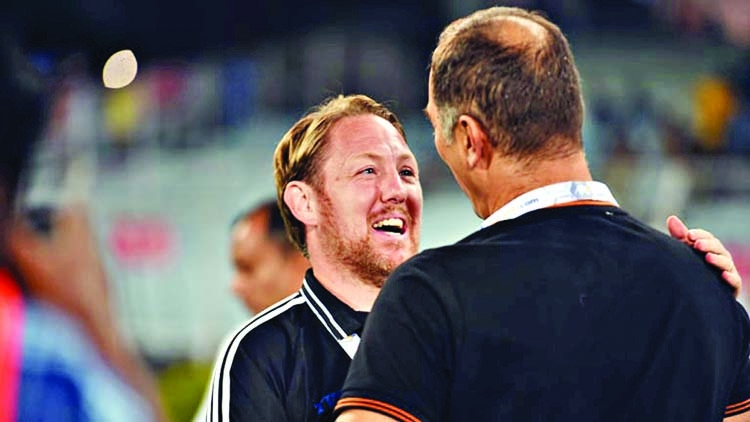 Jamie Day with Indian football team head coach Igor Štimac. -AFC
Bangladesh national football team's head coach Jamie Day in a recent interview with FIFA.com, insisted his side could have collected more points given their solid showing thus far in the group stage matches of FIFA World Cup Qatar 2022™, according to an article published on Friday at FIFA.com.
We have to be realistic,"Bangladesh coach Jamie Day told FIFA.com last year before the start of Asia's second qualifying round for the FIFA World Cup Qatar 2022™, in which they were drawn in Group E alongside four stronger opponents.
"We knew that we'd be the underdogs of the section and would be competing against teams higher up the FIFA/Coca-Cola World Ranking. We played very well in these four games and could have picked up more points," said the Englishman.
Bangladesh began the second qualifying round with a 1-0 defeat to Afghanistan before losing by two goals to Asian champions Qatar. They then shared the spoils with India before suffering a painful 4-1 reverse to Oman, the only result that Day regrets.
"We've put on good performances in all of our games, but the goals we conceded against Oman in the second half were very disappointing," he said.
With their group campaign at the halfway mark, Bangladesh's chances of progressing are slim, despite three of their four remaining games being on home soil. While Day looks forward to hosting Afghanistan, India and Oman.
, he laments that there will be something vital missing that would have made a huge difference.
"We look forward to playing at home and securing enough points to realise our dream of reaching the Asian Cup, but we're disappointed that we'll be without our fans, who would've given us massive support in these games," he explained.
Having arrived in Bangladesh in 2018, Day oversaw some impressive results that helped the team move up seven places in the World Ranking. Moreover, he led the U-23 team to third place at the 2019 South Asian Games.
Asked about football in Bangladesh, the 40-year-old coach said: "When I came here in 2018, the national team were in a bad shape, but I believe we've come a long way over the past two years. We should now aspire to win a trophy over the next two years."
Bangladesh is famous for its love of cricket, which Day thinks is much more advanced there than football for several key reasons. That said, he feels that the country could one day be among of the best in Asian football.
"I think football is very popular in Bangladesh, but cricket is much more developed in terms of infrastructure, funding and sponsorship. The footballing infrastructure must be improved here, all the way from grassroots level to professional clubs competing in the local league. This would in turn help develop the game further and produce more promising young players in the future," he concluded.