"Important thing is how well you return after making mistakes" 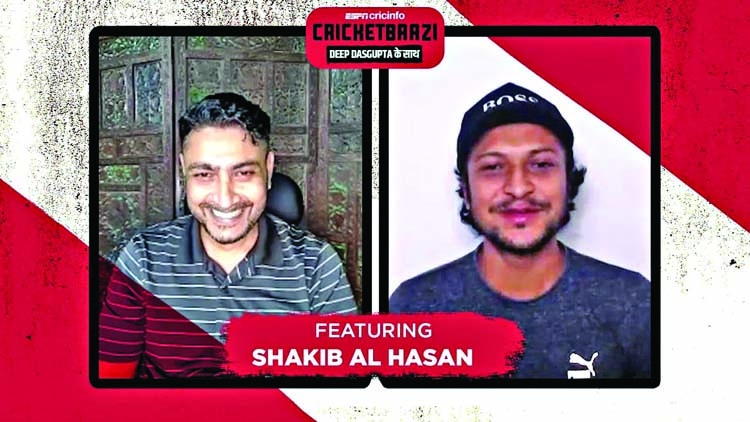 Shakib Al Hasan speaking during an interview on ESPNcricinfo's Cricketbaazi series, hosted by Deep Dasgupta recently. -Collected
Bangladesh star all-rounder Shakib Al Hasan on Friday said that people are bound to make mistakes and the important thing is that how well they make a comeback.
Last October, Shakib was banned from all forms of cricket after he accepted the charges of breaching the ICC's Anti-Corruption Code. He will be able to resume international cricket from October 29, 2020, reports agencies.
"You have to be honest. You just can't lie to the people and pretend different things. Whatever happened has happened. People are bound to make mistakes. You are not 100%. The important thing is how well you can comeback from those mistakes. You can tell other people not to make those mistakes. Tell them the path so that they never take those paths," Shakib told Deep Dasgupta in a videocast hosted by ESPNcricinfo.
The 33-year-old all-rounder said he has seen many controversies ever since he was first made captain in 2009. He had trouble with the board chief, selectors and the media, mainly about selectorial decisions and not being made permanent captain between 2009 and 2010. He believes those experiences have changed him as a person over time.
"I think [it's] combination of both [controversy following him, and vice versa].
I got the responsibility so early in my career, I was bound to make mistakes. I was captain when I was 21. I made a lot of mistakes, and there are so many things that people think about me. Now I realise that it was my fault in some areas, and in some I was misunderstood. But I get it completely. It is part and parcel in the subcontinent," Shakib said.
"Of course I will try to minimize [my mistakes] as much as I can, but by the time I got married, and now I have two kids, I understand the game and life better. It has made me a calmer person than I was in my twenties. I have changed quite a lot. People won't see me doing a lot of mistakes now. My two daughters changed my life completely," he added. Shakib is likely return to international cricket during Bangladesh's proposed Test series against Sri Lanka in October.