Root run out as WI make early breakthrough in decider 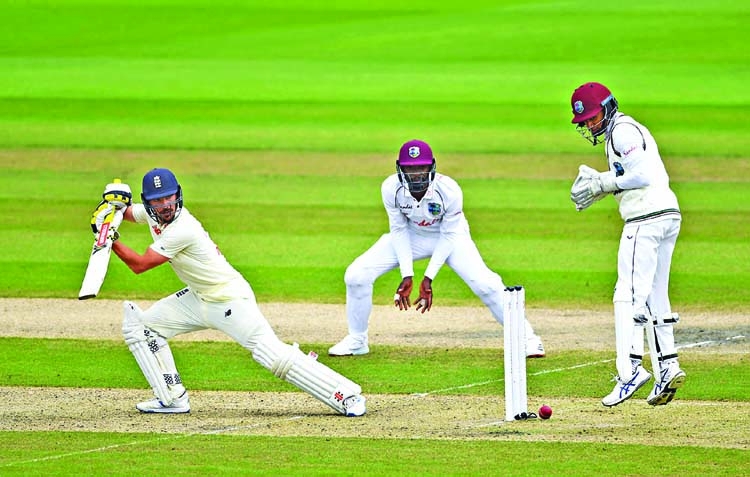 West Indies took two early wickets as both Dom Sibley and England captain Joe Root fell cheaply on the first day of the decisive third Test at Old Trafford on Friday.
England were 66-2 at lunch, with opener Rory Burns 33 not out and Ben Stokes, the batting hero of their second-Test win, on seven. It took West Indies just five balls to strike after captain Jason Holder won the toss on an overcast morning in Manchester.
Sibley had frustrated the West Indies with a near eight-hour hundred during England's 113-run win in the second Test at Old Trafford that levelled this three-match series at 1-1. But on Friday he was lbw for nought to a full-length delivery from Kemar Roach, with Sibley not even bothering to review.
There was a worrying moment for the tourists when fast bowler Shannon Gabriel limped off midway through his fourth over with what appeared to be a hamstring injury.
West Indies had selected just three frontline quicks for this match, with giant off-spinner Rahkeem Cornwall replacing Alzarri Joseph in the only change to their side. But Gabriel did return eventually following what a team spokesman said was "general tightness".
England had dropped number three batsman Zak Crawley and left-arm paceman Sam Curran, with their places taken by express quick Jofra Archer and veteran spearhead James Anderson. Left-hander Burns drove Roach through the covers for the match's first boundary in the 12th over. But after England had made steady progress they gifted the West Indies a second wicket.
Burns cut Cornwall and Root, promoted to number three in Crawley's absence, called him through for what was always going to be, at best, a tight single.
Root, however, failed to beat Roston Chase's direct hit from backward point and was run out for 17, with England now 47-2.
- 'Jofra is ready' -
Archer had been left out of the second Test for breaching the regulations designed to prevent coronavirus infections after making an unauthorised trip home.
The Barbados-born quick had subsequently said he had been subjected to online racist abuse. But Root, speaking at the toss, insisted: "Jofra is ready to play. Over the last couple of days he's got his smile back, he's bowled with real pace in the nets."
With doubts over the bowling fitness of star all-rounder Stokes, who had a quad injury, England decided to play an extra seamer. Stokes, who scored 176 and 78 not out while climbing to the top of the Test all-rounder rankings in the second match of the series, was passed fit to bat.
Victory for the West Indies would see them secure a first Test series win in England for 32 years. This series, played without spectators, marks international cricket's return from the coronavirus lockdown.