Fears for Uighur culture as scholars vanish in China crackdown 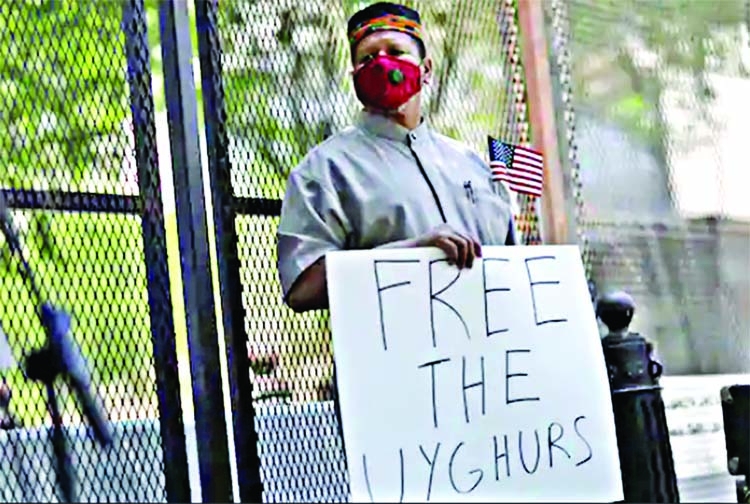 It has been almost two years since Bugra Arkin's father Aierken was abruptly snatched from his home in China's troubled Xinjiang region by national security agents.
Aierken Yibulayin's publishing firm -- one of the biggest in the region -- translated thousands of books into Uighur before he was detained in October 2018. Arkin has not heard from him since.
"My father had a strong impact on the Uighur publishing industry, and that made him a target of the Chinese government," said Arkin, who lives in California.
"This is very unacceptable and our lives were literally destroyed."
He is not the only one.
At least 435 Uighur intellectuals have been imprisoned or forcibly disappeared since April 2017, according to the Uyghur Human Rights Project.
The rounding up of Uighur linguists, scholars and publishers is seen by overseas advocacy groups as part of a campaign by the Chinese Communist Party to erase the ethnic group's identity and culture and assimilate it into the dominant, Mandarin-speaking Han population.
Renowned Uighur linguist Alim Hasani was taken by authorities in August 2018 during a Beijing work trip, according to his son Ershat Alim.
Alim believes that his father, a retired division head of the Xinjiang Ethnic Language Work Committee, was detained for his research, which aimed to standardize Uighur-Han translations.
Hasani, who compiled several dictionaries, was a Communist Party member whose projects had previously been approved by the state and won awards.
"When I first heard that my father was arrested, I never once thought that this could happen to him. He must have been very surprised as well," said Alim, who lives in France.
More than one million Uighurs and other mostly Muslim Turkic-speaking minorities have been held in re-education camps in Xinjiang following a spate of ethnic violence, according to rights groups.
Chinese authorities describe the facilities as vocational education centers where Uighurs learn Mandarin and job skills to steer them away from extremism.
In a statement, China's foreign ministry said: "The so-called notion of 'imprisoning Uighur intellectuals to extinguish Uighur culture' is complete rumor-mongering and slander."
Alim last heard from an acquaintance that his father's trial, which began in January, had been postponed due to the coronavirus pandemic, but fears he will soon be sentenced and jailed.
His mother, who lives in Xinjiang, "wouldn't dare talk" about Hasani's arrest.
"I certainly felt very bad and didn't know how to express it. For a long time I couldn't concentrate on my work either," Alim said.
All 11 linguists in his father's work unit have also been detained, including 64-year-old Hemdulla Abdurahman, who was snatched in January 2019, according to his son Yashar Hemdulla.
"In March 2019, I was told my father had been taken to a 'hospital' ... but the family acquaintance on the call mimed handcuffs on her wrists," said Hemdulla, who lives in Norway.
"I do not know where he is now."
Hemdulla knows several intellectuals whose relatives say they were first detained in camps, then given long-term jail sentences, and he is concerned his father might suffer the same fate.
"At the time, I found it extremely hard. I am an only son, my mother is all alone and my father is not young -- how much more can he take?" said Hemdulla.
While authorities said in December that all people from vocational centers have "graduated", researchers say they have been gradually moved to other forms of detention.
Many have been prosecuted and given prison sentences of up to 20 years, said Gene Bunin, a researcher on Uighur issues and creator of the Xinjiang Victims Database.
"This has partially been a trend in the last one or two years, with the camps being emptied," Bunin said, estimating that at least 300,000 people remain incarcerated.
Fears have also been raised over jailed Uighur intellectual Ilham Tohti, who was awarded a top human rights prize by the European Parliament -- but has not been seen in years.
Uighur literary critic and writer Yalqun Rozi was among the first wave of intellectuals to be detained in October 2016 after hardline Xinjiang Communist Party chief Chen Quanguo took office.
His relatives later discovered that Rozi had been sentenced to 15 years in prison in January 2018 for "inciting subversion of state power" -- a vague charge commonly used for political prisoners.
Authorities suggested that Rozi's detention was related to his role in compiling Uighur literature textbooks that had been in use for more than a decade, said his son Kamalturk Yalqun.
All his father's textbook collaborators were also detained around this time.
Since 2012, bilingual Mandarin-Uighur education has gradually been applied in schools in Xinjiang, with the aim of reaching 2.6 million students.
Prior to that, classes were mostly taught in Uighur and other minority languages.
"By abolishing these textbooks and eliminating Uighur language education altogether, the next generation of Uighur youth will have no way to find their link with Uighur culture," said Yalqun.
"It is a way for China to eliminate the entire Uighur identity and assimilate them to become... people that speak Chinese, think Chinese and don't know their own history or culture. That makes me sad and angry at the same time."
--- AFP