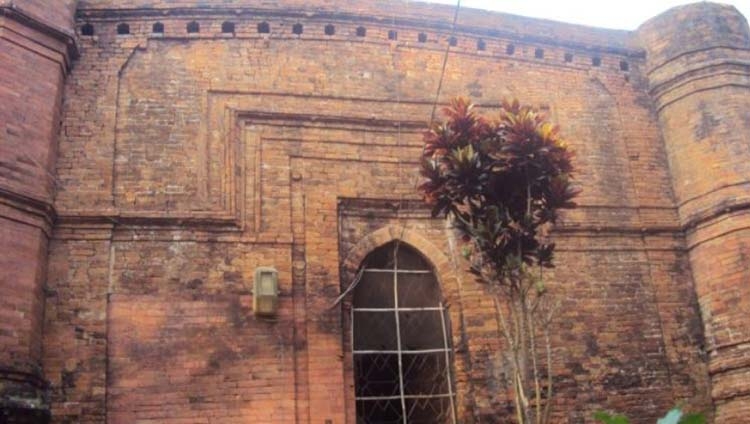 It was built at a time when Sultani era was at its end and Mughal era had just set in. According to the inscription found in the mosque, it was built by Nawab Mirza Murad Khan, son of Jawahar Ali Khan Kakshal, in 1582 AD (989 Hijri). The end of the 16th century AD is regarded as a tumultuous period in the history of Bengal due to anti-Mughal resistance spearheaded by the Bara Bhuiyans.
During this era, the region, mentioned as 'Sherpur Morcha' in Ain-i Akbari by abul fazal, was the stronghold of the Kakshal rebels. They expressed solidarity with the bara bhuiyans of Bengal and the Afghan leader Masum Khan Kabuli. In fact Khherua mosque came into being to serve the community. As it was built while a political crisis was going on, a degree of negligence is evident in the construction and ornamentation of the mosque.
The rectangular mosque is 17.34 meters long from north to south while 7.5 meters wide from west to east. Its dimension from inside is 13.72 meters long and 3.8 meters wide. The walls are about 1.83 meters thick. The mosque has three entrances on the east, of which the central one is bigger than the two on its sides. Also, there is an entry on each side on the north and the south. Inside the mosque, on the west wall, there are three half-cylindrical concave mihrabs within a rectangular frame. The one in the middle is bigger than the other two and all three are devoid of any ornamentation.
Kherua mosque has three domes in a row, which look like three bowls of same size placed upside down. There is no motif or ornamentation on the domes. The construction looks similar to that of Sultani era. The two sides of the cornice are slightly curved taking after the traditional hut of Bengal. This type of roof treatment is seen in most of the 15th century architectural works. In the front walls some paneling work was done. There was some ornamentation with terracotta tiles, which are no longer there now.
There were two inscriptions engraved on the two sides of the central entrance. One inscription is still there while the other is being preserved in the Karachi Museum. From the shape of the stone used for the inscription, it is assumed that the piece was the part of a statue; and the inscription was inscribed on the backside of the statue and placed on the wall. Kherua Mosque demands a great importance as an example of early mughal mosques in Bengal.

Where to stay
Accommodation facilities in Bogra are pretty good and one can find four star hotels in this part of Bangladesh.

Things to do
The village is really wonderful for its scenic beauty. Also there are many visiting places in Sherpur Upazila, like Mosques, Temples, Super Markets, and even you can watch film (if you wish) in Rupkotha Cinema Hall or Sottoboti Cinema Hall in Sherpur Nakla road. You can pray in the mosque and take pictures also.

Eating facilities
You should look for restaurants and food courts nearby, like Sunny hotel and restaurant or Coffee shop.