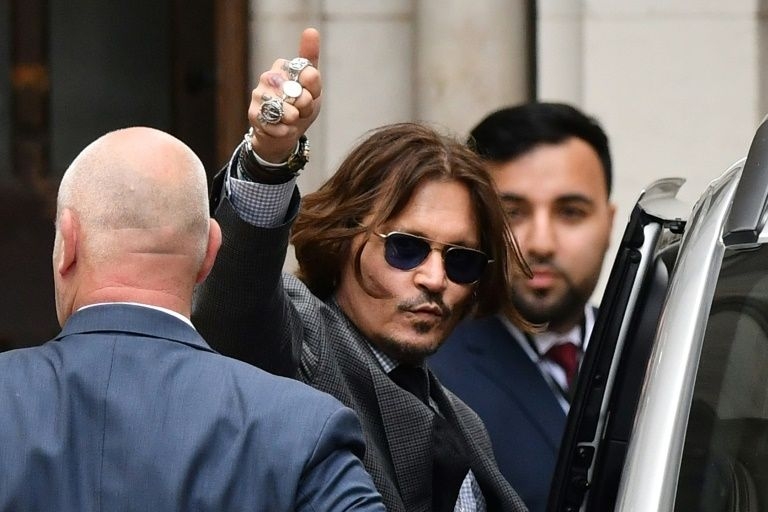 Johnny Depp's legal team played an anonymous tipster's video at his libel trial on Friday aimed at proving ex-wife Amber Heard had a violent streak and once beat up her sister.
The last-minute submission came in the third week of Depp's lawsuit against Britain's tabloid The Sun in London's High Court over a 2018 story accusing him of being a "wife beater."
The "Pirates of the Caribbeans" franchise actor, 57, says the false allegation ruined his reputation and cost him lucrative Hollywood jobs.
The Sun counters it can back up its claim by 14 cases of abuse against the 34-year-old model and actress in a three-year span leading up to Heard's 2016 decision to file for divorce.
Depp's lawyer, David Sherborne, interrupted planned testimony on Friday and asked judge Andrew Nicol to allow him to play what he called "critical" new evidence in the case.
Nicol agreed despite the star-studded case running behind schedule on what was supposed to be its last day.
The undated video showed Amber's sister Whitney chatting with a group of women by a pool.
"I can't believe Amber beat your ass," one of the women tells Whitney in the clip.
"Did you get in a fight?" she asks. A woman then appears to inspect Whitney's cheek and arm.
"I'm not talking about that," says Whitney.
"She really did whip your butt," the woman insists.
"Oh we are not talking about it," Whitney repeats.
Depp's lawyer said he received the video after Whitney denied on Thursday that Heard had a temper and regularly attacked her husband.
Sherborne said the tipster understood Whitney was lying and had video proof.
The lawyer added that it proved that Whitney was tailoring her testimony to fit her sister's own account.
"There is no denial of the fact that Ms Amber Heard beat up Whitney Heard and that there are injuries," Depp's lawyer said.
Depp claims that Heard attacked him regularly and he only acted out against her in self defence.
Whitney explained on Friday that the video was an outtake of a "really bad reality TV show" in which the cast was trying to make "a very, very boring story more interesting."
"We were referencing a verbal argument my sister and I had got into the night before," she said.
Whitney added that other members of the cast were "looking for injuries that were not there."
Both legal teams have accused the other sides' witnesses of lying under oath.
Whitney testified on Thursday that Heard only hit Depp on one documented occasion and had never been violent toward her or anyone else.
The case is due to finish after legal submissions on Tuesday. - AFP