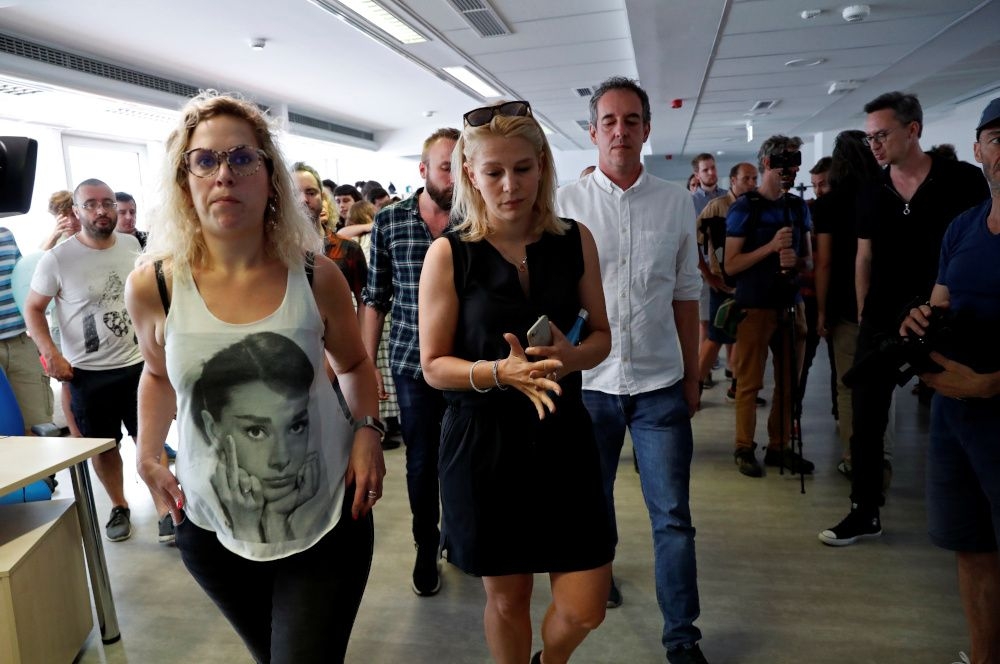 More than 70 journalists and staff at Hungary's top news site Index have resigned, accusing the government of launching a bid to destroy or tame their website.
Index is the last of Hungary's key independent media and editor in chief Szabolcs Dull was fired on Tuesday.
Its journalists said the sacking was "clear interference" and an attempt to apply pressure on the site.
Hours later protesters gathered in Budapest to rally for media freedom.
Over the past decade, supporters of nationalist and conservative Prime Minister Viktor Orban have gradually taken control of Hungary's independent media. Hungary is ranked 89th out of 180 countries on the Reporters without Borders World Press Freedom Index.
Demonstrators were planning to march on the prime minister's office.
Only last month, Szabolcs Dull had warned that Index was "under such external pressure that could spell out the end of our editorial staff as we know it". In an alarming piece published on 22 June, he warned that the website's editorial staff were "in danger" and the dial on a "freedom barometer" on the homepage was moved to "in danger".
On Friday, three leading editors and more than 70 others said they were ending their employment there, because board president Laszlo Bodolai had refused to reinstate the chief editor. There were emotional scenes as they proceeded to walk out of the office.
Mr Bodolai rejected claims that the website's independence was at risk, blaming Dull for failing to control tension within the newsroom.
Pro-Orban businessman at centre of row
Fears for Index's independence came to a head a few months ago when Miklos Vaszily, a pro-Orban businessman, took a 50% stake in the firm that controls Index's advertising and revenue.
He already ran pro-government broadcaster TV2 and was seen as playing a key role in turning another Hungarian website, Origo, into a pro-Orban outlet.
As the drama unfolded in the Index newsroom on Friday, a photo emerged of Mr Vaszily having lunch with key Orban adviser and historian Maria Schmidt.