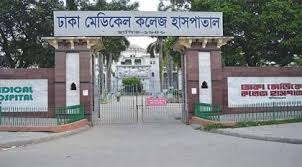 A four-year old minor girl who received burn injuries in a fire that broke out at a house in the city’s Bongshal area on Thursday died at Sheikh Hasina National Burn and Plastic Surgery Institute early Saturday.
The deceased was identified as Jannat, daughter of Md Jabed.
Jannat’s brother was burnt to death while she along her parents sustained burn injuries in the fire that broke out on the ground floor of the two-storey building at Kasaituli on Thursday.
Jannat, who received 60 percent burn injuries, succumbed to her injuries in the early morning, said Inspector Bachhu Mia, in-charge of Dhaka Medical College and Hospital police camp.