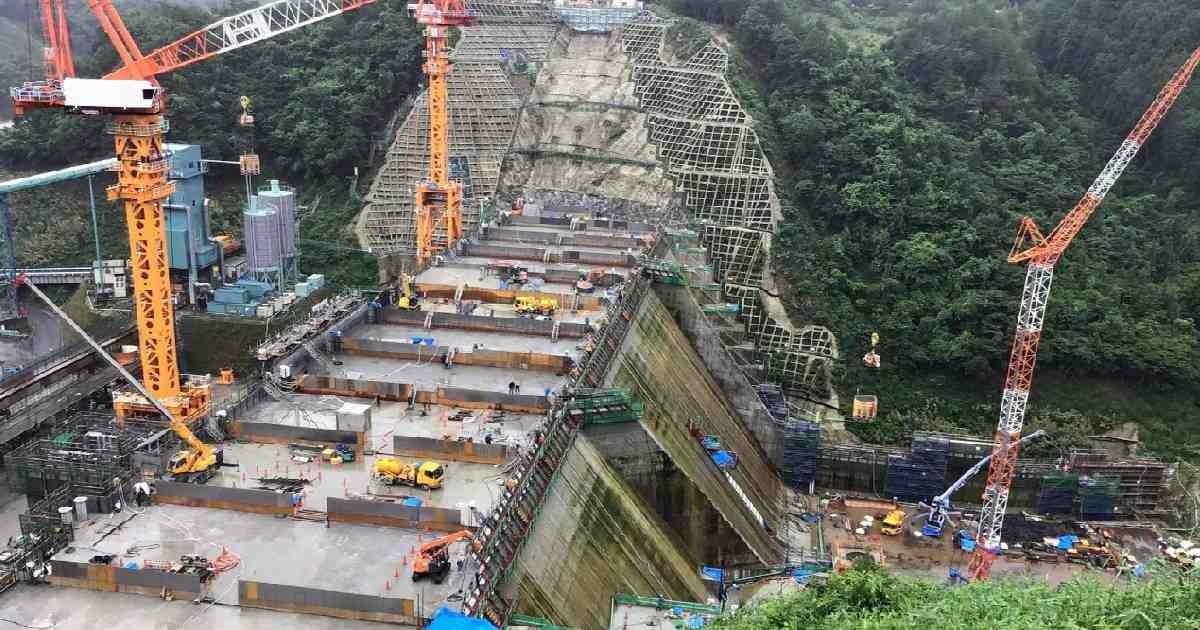 The Obayashi Corporation, one of the five largest construction companies in Japan, is building a dam almost entirely with robots, addressing the industry's labor shortage and aging workforce, according to a report on the Nikkei Asian Review website.
The dam project is located in the Mie Prefecture, in the south-east corner of Japan’s main island.
The 84-meter-high structure is slated for completion in March 2023.
Obayashi will be testing a variety of robotic and automation technologies in its construction.
Obayashi has developed automated equipment to stack concrete layers to form a dam.
To further streamline the process, a plant has been built near the site to mix sand and gravel with cement to make concrete.
Building a dam requires knowledge and skill developed through years of experience. Obayashi's automated system is expected to be a game-changer in dam construction, as well as in other applications.
"By transferring expert techniques to machines, we're able to analyze what was once implicit knowledge," said Akira Naito, head of Obayashi's dam technology unit.
Every process for constructing the 334-meter-wide dam will involve some form of automation. That includes the initial work of establishing the foundation, and pouring concrete to form the body.
The dam's body is built in layers by pouring concrete into 15-meter square partitions. Tower cranes that pour the concrete are controlled remotely by office computers, which also monitor the positioning of the partitions and the progress of construction.
Humans will man the cranes for safety reasons, but the machines are self-operating.
Building a dam is an intricate endeavor that requires all crevices to be sealed to prevent breaches. Concrete surfaces need to be processed so they are tightly stacked on one another.
Layers that are uneven are usually brushed down by human professionals until they are flat. Obayashi has developed machines that handle the brushing. The frequency of the cyclical brushing and the pressure on the surface are automatically controlled.
As poured concrete builds up, the forms used to give it structure need to be raised to keep unset concrete from leaking out. Normally, multiple skilled workers in heavy machinery operate in tandem to gradually lift the forms, calling out to each other to coordinate their movements.
Obayashi has developed a robot to handle this task, allowing for humans to be cut out of the picture entirely.
Surprisingly, Obayashi says all of its futuristic solutions have only increased productivity by about 10%, since it still needs to have people on-site ready to jump in should things go wrong. The company plans to acquire more know-how so it can eventually reduce the amount of manpower it needs.
"Eventually, we may be able to cut building time by 30%," said Naito.
Other Japanese contractors are also working on automation. Kajima has developed self-driving bulldozers and dump trucks so construction can continue 24 hours a day. It has automated the lifting of concrete forms, which it used at a dam construction site in Hokkaido for the first time.
Dam construction is especially conducive to automation, since it involves a lot of repetition and tends to happen on sprawling sites far from population centers, meaning there is less risk of automated equipment hitting bystanders or other machinery.
Japan's construction industry is aging quickly, with 35% of all workers now 55 or older, according to the Japan Federation of Construction Contractors. Companies are scrambling to build robots based on workers' expertise before they retire. The companies also hope that new technology could dispel negative stereotypes of the industry among younger generations, encouraging more people to work in construction.